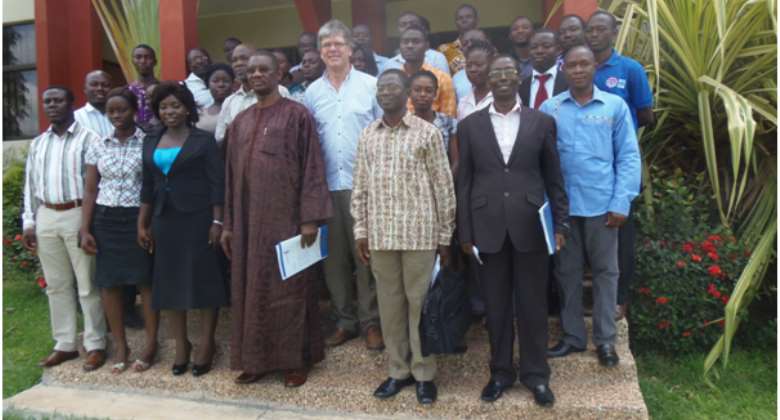 But the fortunes of the coconut industry have been on the decline since 1932 with the incidence of a lethal disease, locally referred to as the Cape St. Paul Wilt Disease (CSPWD).

The disease has destroyed several thousand hectares of coconut palms over the years and continues to pose a threat to the survival of the coconut industry.

Now, a collaborative research activity has developed assays to detect causal organisms of the coconut disease. The plant scientists involved are from the Oil Palm Research Institute (OPRI) of the Council for Scientific and Industrial Research (CSIR) and the UK's University of Nottingham with the support of the French Embassy in Ghana.

According to Dr. Abdulai Baba Salifu, Director-General of the CSIR, the use of biotech facilities “have enabled scientists to predict CSPWD-infection of palms long before the characteristic CSPWD symptoms begin to show, thereby enabling containment measures to be taken to forestall further spread of the disease”.

He added that the biotech facilities have also enabled investigations to be conducted on alternative hosts of the CSPWD phytoplasma, and on the genetic variability of the CSWD-causing phytoplasma in Ghana.

The Coconut disease is spread from one plant to another through an unidentified insect.

Dr. Egya N. Yankey of the Oil Palm Research Institute has stated that the new technique helps identify the disease at an early stage in order to put in containment measures.

According to him, the coconut disease has been devastating on the lives of coconut farmers in the Western and other coastal regions.

Dr. Yankey describes the technique as easy to use and he is hoping farmers would be able to access the technology within the year, after training of agric extension agents on application.

“With this kind of method, we can now detect the pathogen very early even before the symptoms begin to show and then we can put in control measures, so that it doesn't affect a whole lot of plants and farmers do not suffer”, he said.

Prof. Matt Dickinson of the Nottingham University noted the technique can be applied in developing assays for plants, animals and humans as well as apply in authenticating food products to assess contamination.

I'll hand over power to the next elected president on 7th Ja...
30 minutes ago

[VIDEO] Ghana is hot; our girlfriends are moving to Togo – J...
39 minutes ago