Court Issues Bench Warrant For The Arrest Of Eunice Boateng After Failing To Appear In A Case Against Dutch Business Tycoon, King Arthur Paes 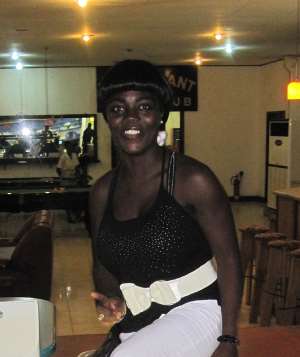 When the case was called yesterday, Miss Eunice Boateng who was granted GHc 5000.00 bail of reappearing on 12th March 2013 with two sureties the last time she appeared before the court was nowhere to be found.

The Judge Sedina Agbamava then issued a bench warrant for the immediate arrest of Eunice Boateng.

Even though Mr. Paes was fully represented in court, the case has to be adjourned to 21th April 2013 since Eunice Boateng failed to show up.

The fact of the case as read by Prosecutor ASP Celina Acquah was that the accused Eunice Boateng, a business woman and guardian to Georgina Donkor, the victim who lives at Nungua, Accra.

She indicated that on 23/12/2010 at 4:30 pm, the accused accompanied the victim to DOVVSU/AR and reported a defilement case against an expatriate, one Arthur Paes owner of African Royal Beach Hotel at Nungua, Accra.

The case docket according to the prosecutor, was then forwarded to the Attorney General's Department for study and advice on 23/06/2011.

She said whilst the complainant was waiting for the advice from the Attorney General's Department, the accused on 29/02/2012 produced a Birth Certificate bearing the name of the victim Georgina Donkor with an entry number 5545 registered on 20th December 2010 issued on 23rd December 2010, the very date she accompanied victim to lodge her complaint.

In addition, the records obtained from victim Georgina Donkor's Ghanaian passport number H0962148 issued on 20th September 2002 showed her date of birth as 10th October 1991 which was confirmed by the Passport office to be genuine.

The Prosecutor continued to tell the court that investigations were extended to Victory International Junior Secondary School at Avoeme-Aflao in the Volta Region where victim had her basic education.

It was also revealed that the victim in her initial statement to the Police stated that she was born at Mankessim in the Central Region, however the accused claimed she was born at the Korle-Bu Teaching Hospital in Accra raising more doubts about the authenticity of the Birth Certificate.

According to the brief sheet of the Investigator, all the documents were then forwarded to the Attorney-General's Department to add to the docket for the study and advice.

On 15/10/2012, an advice was received from the Attorney General's Department signed by Dufie Prempeh, Assistant State Attorney indicating that it is highly conspicuous from the evidence gathered so far that there are lots of inconsistencies in the story of the victim and the accused.

It added that the age of the victim given by the accused, the forged Birth Certificate and the basic school certificate showed that her claim of defilement is not to be believed and that the facts do not add up to sustain a charge of defilement against Arthur Paes and for that matter the charge be dropped.

The advice from the Attorney General's Department also added that the accused person should rather be charged for the offence stated above as she is the person behind the fabrication of the story and the forged document as well as statement given to the Police which she knew at the time of giving it to be false.

The investigator recounted in his brief that the accused was then arrested and during interrogation she stated among other things that the Birth Certificate of the complainant was prepared for her by someone.

The accused declined to mention his name at the 37 Military Hospital Registry and stated that she will only produce the person in court as her witness but she has since failed to do so.

EUNICE BOATENG, WHO IS ON THE RUN