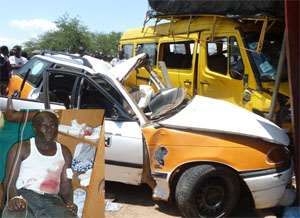 The injured were the driver of the taxi, Kwame Ansah, 18, from Brebia, Mary Sam, a 20 year old pregnant woman and his son, Abeiku from Abakrampa and Karikari Mensah, a native of Assin Ekrofuom.

They have been admitted to the Central Regional Hospital as doctors are working hard to save them.

He stated that the taxi driver, who was going to Abakrampa, on reaching the junction did not observe any road sign but cross into the main road.

The DSP added that the 207 bus, which was coming from Kumasi direction, attempted to swerve the taxi but unfortunately they crashed resulting in the injuries of the four.

Information gathered at the hospital indicated that the taxi driver was driving under the influence of alcohol hence the accident.

According to the taxi driver his brakes failed  when he saw that the driver of the 207 Benz bus was speeding.

Meanwhile,  the driver of the 207 Benz bus has been granted bail by the Abura Dunkwa Police Command.