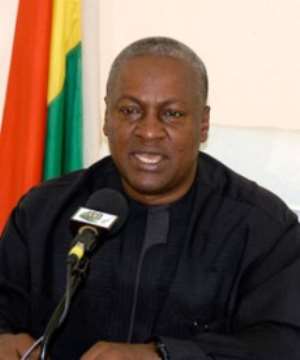 This society is on a free-fall. I do not believe we need the International Monetary Bank, the World Bank, or any of our fair-weather friends from the West to pronounce on the dire state of the economy, before action is taken. We all feel the pinch in the market place every day.

Prices of goods and services are going through the roof. Like the man in Chinua Achebe's Things Fall Apart, 'sitting by his doorsteps with his house ablaze inside, and obstinately arguing against the destructive force of fire,' the Ghana Statistical Service may continue to churn out single digit inflation figures.  The market situation is boiling to the cauldron of run-away prices of goods and services.

I am not an economist. But, when prices of goods and services go through the roof on a daily basis, I do not need lectures by propagandists running the economy to tell me that all is not well with the economy. Better Ghana may continue to resonate among a group of people who have taken advantage of the gullibility of a large number of our people to improve on their economic well-being. It has not succeeded in moving this nation out of the woods. It has rather become a smokescreen to paper the cracks in an administration that appears to have developed a blurred vision of where it intends to take this country.

When President John Dramani Mahama told all nationals on February 21, the day he went to address a half-full Parliament in his State of the Nation address, that the economy was at the bare-bone state in its economic direction, he lost my sympathy.

It is not as if I have ever supported the rhetoric of a Better Ghana, when all around this nation, there is decay. The statement contradicts the position of this administration and the political party that props it up, which had gone into the 2012 Presidential and Legislative elections, shouting from roof-tops that the government had conjured a Better Ghana, when in fact, the administration had removed all the flesh on the state economy it inherited.

At the time the Head of State made his 'bare-bone' pronouncement, electricity was on and off throughout the nation. Water was, and is still being rationed in tots. What has become known in local parlance as 'dum-so dum-so is the rule, and no more an exception.  One innovation is that even the publicised load-shedding exercise counts for nothing.

The Electricity Company of Ghana (ECG) has earned a number of new accolades. Some prefer to call it Either Candle or Generator. Others refer to good old ECG as Electricity Comes and Goes.

With the average Ghanaian grappling with all this wahala, the Presidency is reported to have over-spent its budget allocation by a whopping GH¢600 million. The state machinery is also said to have over-shot its expenditure in 2012 to the tune of GH¢8.7 billion. The economy cannot be in good shape.

We are told that even NADMO (National Disaster Management Organisation), over-spent its budget by GH¢300 million in the run-up to the elections.

According to one-pro National Democratic Congress newspaper, all warehouses of NADMO are empty. The newspaper is warning Ghanaians that if there should be any form of disaster in any part of the country, NADMO would be powerless in offering assistance to the victims.

'To be brutally frank with you, we don't have anything in stock now. What we have is an emergency supplementary, and that is what we are depending on now,' NADMO Deputy National Co-Ordinator Sylvester Azantilov reportedly told the Herald Newspaper , widely considered as a pro-NDC publication.

I do not believe anybody needs to stretch his or her imagination to understand how NADMO and indeed, the state machinery of Ghana, got so broke.

The technical description is that the state machinery, the Presidency, and even NADMO, led by Kofi Portuphy, a dyed-in-the-wool NDC operative, over-spent the resources at their disposal.  I can state without equivocation, that all three state institutions used the resources at their disposal buying the vote of the Ghanaian, so that the NDC, led by Mr. Mahama, could return to Government House.

NADMO sent all manner of items to voters, convincing them to vote NDC. I remember one episode involving two elderly women at Cape Coast. Asked how they intended to vote, the grand old ladies told an Accra-based television station that they had received their cloths, and were going to vote for the NDC.

In the Ekumfi Constituency, for instance, where the dynamic Ato Cudjoe, the New Patriotic Party candidate was a threat to the NDC's ambition to retain the seat, all manner of relief items found their way to grease the palms of voters just before the queues began forming at the various polling booths.

In the end, Ekumfi sent Abeeku Crenstil, a personality who may not be able to compose a meaningful sentence in the Queen's language to Parliament House. By the way, the official language of the House is still English. What is worrying is that Abeeku's opponent in the elections holds an MBA degree.

A top official of the NDC told me in Accra that the party had to send a number of items to Ekumfi in order to convince the electorate to tilt the vote in favour of the ruling party. In the words of this top NDC official, it was considered sacrilegious for the NDC to lose Ekumfi, the home constituency of the late President John Evans Atta Mills, barely six months after the former law lecturer had joined his ancestors.

I am told that barely one week to the elections, about 2,000 sewing machines were distributed in the constituency. That aside, there was rice, outboard motors and free cash. Obviously, all these resources were paid for.

In all parts of the country, money, especially, the new GH¢50 notes which were re-printed by the NDC administration at the time Paa Kwesi Amissah-Arthur, currently Vice-President of Ghana, directed the Bank of Ghana, ostensibly because smugglers were perfecting the art of reproducing the notes, were exchanged for votes throughout the country..

It is this mad rush for votes that has landed this nation in this very difficult situation, I dare state. I hope no one is going to waste our ears about recurrent expenditure which aided the over-expenditure syndrome. The pay rise, which the President is trying hard to use as reason for the over expenditure, started with the need to offer presidential aides more wages to galvanise them to mislead the people the more in the run-up to the vote.

When the likes of acidic-mouthed Tony Aidoo, Nii Lante Vanderpuye, Stan Dogbe, Halidu Haruna and co., had their wages nearly doubled in June 2012, it triggered a pay rise in Parliament, where the members were given GH¢7,200 each, per month.

The MPs, in turn, handed the President a cool GH¢12,000 per month. Vice-President Paa Kwesi Amissah-Arthur was given a juicy deal of GH¢10,500, with Cabinet Ministers sitting pretty at GH¢10,000 each.

Single Spine may have increased the wages of public sector workers a bit. But, it certainly

cannot be blamed for fat-cat salaries of politicians, who have got the state to overdraw on its account.

The dislocation of public finances should not be blamed on poor workers who are still at the wrong end of the economic miracle in Ghana. The economic woes of the country, in all fairness, could be laid at the feet of the Presidency. I am of the view that the attempt to put all state institutions under the umbrella has also not helped.

That is why I am of the opinion that the Presidential advice to District Chief Executives to stop abusing the Common Fund might not offer any joy to the Ghanaian. The President cannot claim to be unaware that his chief executives in the districts are more interested in catering for the Presidency and the party in power, than the people they serve.

In the run-up to the elections, The Chronicle had occasions to complain that the offices of the Metropolitan, Municipal and District Assemblies throughout the country had been turned into offices of the NDC, where the re-election of the party and its presidential candidate were all that mattered.

I am afraid the ordinary Ghanaian would continue to feel the pinch of a misapplied economy. If you want to understand the concept of Better Ghana under this administration, there is your answer!