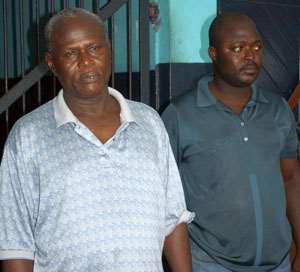 The two, James Quaye, 63 and Nii Okai, 32, a horticulturist were said to have acted as landlord and agent respectively, and collected monies ranging between GH¢500 and GH¢1200 from the victims.

They were arrested after one of the victims reported the matter to the Korle-Bu District Police Command for investigations.

They have been charged for conspiracy to commit crime and defrauding.

Nii looked for desperate clients in search of a single room apartment within the Korle-Bu area and took them to James, the supposed landlord.

They then collected money from the victim and went into hiding.

They had used the same modus operandi to defraud eight people.

The first complaint whose money was collected in August last year, but could not get the apartment, reported the matter to the Korle Bu Police.

The seven others, upon hearing that the suspects had been arrested, reported to give their statements that monies had also been collected from them by the two to get them single room apartments.

Police investigations later revealed that the room in which the two were using to defraud their victims was not for James.

Suspect James, according to the police public relations officer, was a caretaker of the house which belonged to a friend.

'They would be sent to court soon' he added.
By Linda Tenyah