Reshuffling Regional Ministers all too soon is impolitic 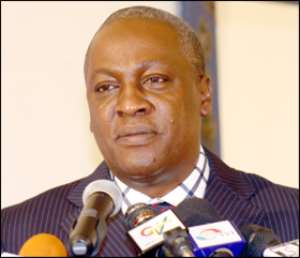 President John Mahama has announced his first ministerial reshuffle barely a month after appointing them into office. Here is the change:

10. Minister of State at the Presidency, Alhaji Limuna Mohammed Muniru, moves to the Upper East as Acting Regional Minister.

I don't agree with this reshuffle, which I consider to be impolitic, in many senses.

The reasons given for the reshuffle are porous, to say the least. What was the President thinking of at the time he appointed these Regional Ministers to the various regions? What informed the initial decisions that he made? And what has happened all too soon to negate those reasons and warrant this reshuffle?

Did the President not know of the existence of the MMDAs and the need to appoint Ministers whose acumen could help him achieve the objectives of the MMDAs at the time he appointed them?

The timing of the reshuffle itself is bad. Clearly, these appointees haven't even yet settled in their offices before being whipped around.

Some of the Ministers have already served in various capacities in the Regional Coordinating Councils from which they are being transferred just as they have prepared grounds to begin work (Nii Afotey Agbo, John Evans Aidoo, and Bede Ziedeng, for instance).

The last time any switching of this sort was done by ex-President Rawlings, there were several hiccups, one of which that I remember very well was Kojo Yankah (native of the Central Region) being moved to the Ashanti Region and the late Col. Charles Kofi Agbenaza (native of the Volta Region) sent to Cape Coast to replace him.

Many things happened in this case which ended in Kojo Yankah's being suspected of not working in the interest of the government and transferred to the National Development and Planning Commission, which he detested and resigned instead.

In taking that action, ex-President Rawlings had intended to move beyond ethnicity and familiarity with the regions as the rationale. But I don't think that novel approach to local government worked well.

What President Mahama has done now is not only haphazard to me but it also suggests lack of foresight. If at the time these Ministers were appointed none in government had any idea on what the MMDAs needed and will now come up with this idea to switch the Ministers around, I suspect that something wasn't being done right.

These Ministers are moving into territories whose development challenges they may not immediately know. Learning the ropes is part of what every worker does, but in this case, I think that the changes will not be beneficial in the long run.

The Ministers will also face local language barriers, let alone disdain from those who may consider them as “outsiders” being imposed on them. It is a Ghanaian reality that should have been considered carefully before this reshuffle was made.

The sudden changes also suggest that someone is not in full control of affairs at the Presidency. This is not good, and the President must sit up.

More importantly, the Ministers have personal challenges to deal with. Take, for instance, Mr. Julius Debrah and Mrs. Helen Ntoso. Of course, we all assume that every Ghanaian can work anywhere in the country; but these Ministers being switched around will have it tough if they don't immediately win the confidence of those they will work with or if political intrigues begin affecting relationships adversely.

I can hazard the guess that some stiff opposition will soon emerge against the appointment of some of these people to some of the regions. I don't know which, but I know that some will find it tough settling in.

Finally, I expect that instead of applying such cosmetic measures in attempting to handle the challenges of the MMDAs, the government should be bold to take the decisive step of making the positions to the Regional Coordinating Councils, Metropolitan/Municipal/District Assemblies electable. The people in the various areas should elect their own administrators so the government can save itself this kind of embarrassing reshuffle.

By the three-tire local government arrangement (Article 462), the highest level is the national one, which is made up of the Central Government machinery (which Parliament is part of, and MPs are elected); the second tier is the Regional Coordinating Council; and the third ones are the MMDAs.

Once there is election for MPs, there should also be for the MMDAs so the people can determine who should be in charge of their affairs, not anybody imposed on them by the Central Government. Where is the “decentralization” element in this case?

Before all else, the President must act decisively and not do things this way to give disturbing signals. Yes, we want efficiency to be placed ahead of all considerations for public office holding but we at the same time expect that the President will not be left wanting.

I think that a lot has to be done to re-assure Ghanaians of why this switching around of Ministers has been done all of a sudden, just a month after the initial appointments were made and the nominees vetted for the Regions from which they are now being transferred.

During vetting, they articulated their reasons and development plans for those regions, not where they are being moved to now for which they have no plan and will now be forced into devising some. That's not a good thing to do so early in the administration of national affairs.