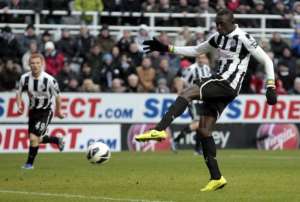 PARIS (AFP) - Nigerian Innocent Emeghara scored one goal and created the other as Siena won 2-1 at Palermo in a weekend Serie A relegation clash.

Emeghara, who is on loan from French club Lorient, equalised after 51 minutes and won the penalty in the closing stages that was converted to secure maximum points.

It was a profitable weekend for Africans in Italy with Senegalese Boukari Drame firing a 30-metre goal for Chievo in a 2-0 triumph against second-place Napoli.

The Nigeria midfielder came off the bench to help the FA Cup holders rescue a 2-2 quarter-final draw at Manchester United. Rafael Benitez's team were trailing to first-half goals from Javier Hernandez and Wayne Rooney until Mikel and Eden Hazard came on in the 52nd minute. The changes sparked Chelsea into life and Hazard got one back before Ramires equalised.

The Ivory Coast midfielder put City on their way to the FA Cup semi-finals as his assist set up their first goal in a 5-0 win over Barnsley at Eastlands. Roberto Mancini's men outclassed their Championship opponents from the 11th minute when Toure's sublime flick fell to David Silva and his saved shot was converted on the rebound by Carlos Tevez.

The Ivory Coast striker helped Wigan reach the FA Cup semi-finals for the first time with a surprise 3-0 win at Everton. He didn't get on the scoresheet, but his unselfish movement and pace unhinged the Everton defence on several occasions as three goals in four first-half minutes from Maynor Figueroa, Callum McManaman and Jordi Gomez killed off Everton.

The Nigerian defender was rock solid but couldn't inspire Millwall into the FA Cup semi-finals as his Championship side were held 0-0 at home by fellow second-tier team Blackburn. Former QPR centre-back Shittu, who rejected the chance to play for title winners Nigeria at the recent Africa Cup of Nations, produced a dominant display to subdue Blackburn's forwards and also came close to winning the tie with two powerful shots that drew good saves from Jake Kean.

The Tunisian striker took his goal tally for the season to eight with a double, including a 64th-minute penalty, as struggling Evian/Thonon tasted a rare 5-1 victory over fellow relegation candidates Sochaux, to lift themselves above their opponents on goal difference.

Came on for Bordeaux at half-time against Bastia and the Malian striker immediately made a difference to the shape of the attack and it came as no surprise that he should score the only goal of the game, tucking away a cross from Tunisian midfielder Fahid Ben Khalfallah in the 57th minute.

After his decisive display as a substitute the previous week when he set up both Marseille goals against Troyes, the Senegalese midfielder was handed his first start away to Lyon and took the chance with both hands, almost scoring with a fierce shot after nine minutes and setting up Andre-Pieree Gignac with a cross, but was substituted towards the end as the game faded to a goalless draw.

The Cameroon defender had his early bullet header cleared off the line as Schalke did the double over German champions Borussia Dortmund with a 2-1 victory. After Julian Draxler and Klaas-Jan Huntelaar's first-half goals, 21-year-old Matip was solid at the back as Dortmund scored a second-half consolation.

The Ivorian had a goal controversially disallowed in a 0-0 draw at home to Eintracht Frankfurt in heavy snow. Former Manchester United striker Mame Diouf and midfielder Ya Konan had chances for Hanover, who claimed a goal after Frankfurt captain Pirmin Schwegler cleared Ya Konan's shot, but the referee waved on play and replays failed to determine whether the ball had crossed the line early in the second half.

The Senegal international scored his first goal of the season for Chievo with a superb strike from 30 metres after the ball had been cleared out of the Napoli defence. Chievo went on to win 2-0, dealing a big blow to the title hopes of second-placed Napoli and pulling Chievo well clear of the drop zone.

The Nigerian, on loan at Siena from French side Lorient, played a decisive role in a 2-1 win at Palermo in a duel between relegation candidates. His first goal after 51 minutes levelled the score and then he won the decisive penalty on 72 minutes. Emeghara has scored five goals in seven matches since moving to Italy.

The Nigerian striker scored as his side extended their league lead with a 2-0 win at Samara. Musa got the visitors' second goal on 72 minutes, firing home from close range for his ninth goal of the season.

The four-time African Footballer of the Year could not prevent title challengers Anzhi suffering an unexpected 2-0 defeat at Saransk. Cameroon striker and captain Eto'o was well policed by the home defence.

The Senegalese striker played an important role in a 2-0 away win over Volga. Balde applied pressure and had a clear chance just before the hour mark, but hit the woodwork with a powerful shot.

Manucho scored his eighth league goal of the season as Valladolid came from behind to draw 1-1 with Malaga. The Angolan headed home Alvaro Rubio's cross four minutes before half-time and came close to a winner in the second half as he just couldn't stretch to turn in a dangerous low cross.

Song played the full 90 minutes as Barca got back to winning ways with a 2-0 victory over Deportivo la Coruna. Deputising again for Sergio Busquets in the holding midfield role, the Cameroonian was rarely troubled as the Catalans registered their first clean sheet in 14 games.

Essien was again used at right-back by Jose Mourinho as Madrid registered their sixth successive victory with a 2-1 win at Celta Vigo. The Ghanaian played the full 90 minutes and, after a difficult start, grew into the game to help combat the threat of Michael Krohn-Dehli down the left side.