Fight Against Foreigners In Small Scale Mining – Action Or Rhetoric?’ 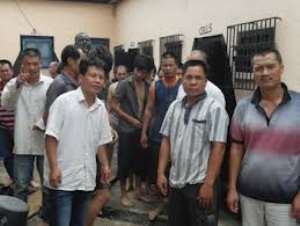 In spite of the many promises made by the government to flush out foreigners engaged in illegal mining, the role of some Ghanaian collaborators is rather helping to intensify the phenomenon, the Daily Graphic has discovered.

Politicians, government officials, traditional rulers, security personnel, business men and opinion leaders are among a tall list of powerful and influential Ghanaians said to be strengthening the resolve of foreign illegal miners whose activities have devastated large acres of land and water bodies across the country.

Armed with excavators, bulldozers, other sophisticated equipment and guns, the foreign illegal miners have been able to subdue everything, including farmlands, rivers, buildings and human beings, that present an obstacle to their scramble for gold wherever the precious mineral is found.

“It is totally unacceptable for non-Ghanaians to disregard our laws and exploit our lands to their benefit,” the Minister of Lands and Natural Resources, Alhaji Inussah Fuseini, said recently as he pledged the government's determination to flush out foreign illegal miners in the country.

The minister's pledge, which he made on Monday, March 4, 2013 during a meeting with officials of the Ghana Chamber of Mines, is the most recent of the numerous pronouncements made by government officials over the years to deal with the situation.

But it appears either the government has not been able to go beyond rhetoric to flush them out or some powerful and influential Ghanaian collaborators have succeeded in freezing the government's promise by preventing the arrest of the illegal miners or ensuring their immediate release after arrest.

Some devil advocates suggest the inaction of the government to flush out the foreign illegal miners, many of whom are Chinese nationals, is an albatross emanating from the $3 billion loan Ghana is securing from China.

Challenges
Interactions with officials of the Minerals Commission, the Ghana Immigration Service (GIS) and small scale mining companies suggest a sense of hopelessness and helplessness in the fight against foreign illegal miners.

The challenge appears very daunting.
First, the government has not been able to provide adequate funding to keep an anti-illegal mining security task force constantly on the ground.

Second, chronic vehicular constraint is hampering the effort of the GIS to monitor illegal foreign miners.

Third, the Minerals Commission, once it issues a license to individual Ghanaians for small scale mining operation, is unable to track whether the license is used by Ghanaians or foreigners to operate.

Fourth, the partnership with foreigners is proving to be an irresistible lucrative venture for small scale mining companies in Ghana.

Although the Enforcement Unit of the GIS is supposed to ensure that foreigners who visit the country comply with the law, the lack of vehicles for the unit to undertake operations is seriously hampering the discharge of that responsibility.

According to the Head of Public Affairs of the GIS, ACOI Francis Palmdeti, each Regional Enforcement Unit needed a minimum of six vehicles to operate but with two vehicles for the whole of the Central Region (one for the regional commander and one for operations), “how can the guys at the Enforcement Unit in the region be effective?”

He said even when vehicles were available the allocation of 30 litres of petrol per week for each vehicle was woefully inadequate for the unit to undertake effective patrols.

The Minerals and Mining Act, 2006 (Act 703) provides in Section 83(a): “A licence for small-scale mining operation shall not be granted to a person unless that person is a citizen of Ghana”.

However, the foreign illegal miners and their Ghanaian cohorts have devised a strategy to outwit the law.

After securing licence for small scale mining operation, the local companies bring foreigners on board to take a frontline role and engage in the actual mining activity.

The officer in charge of small scale mining at the Minerals Commission, Mr Kofi Tetteh, said the commission was aware of the presence of foreign illegal miners.

He confirmed that indeed some of the foreign illegal miners had bought concessions owned by small scale mining companies.

He said many members of the association were collaborating with foreigners to undertake small scale mining in various parts of the country.

According to him, the situation was getting out of hand as many more small scale mining companies join the bandwagon, considering the lucrative nature of the partnership.

The involvement of foreigners in small scale mining has opened a deep crack within the GNASSM, Evangelist Kusi confirmed.

Some members of the association, including the executives, are very eager to enter into partnership with foreigners, while others are strongly opposed to the idea.

Foreigners in mining industry
Since 1471 when Ghana (then Gold Coast) first experienced a scramble for its gold by Portuguese voyagers, led by Don Diego De Azambuja, there has not been any more intense foreign invasion of Ghanaian lands in search of gold than in recent times.

But unlike the 15th Century Portuguese voyagers who only engaged in trade, exchanging clothes, beads and brass bracelets for gold, ivory and slaves from local merchants, a large number of foreigners have today invaded the land, especially in the remotest parts of the country, digging everywhere to extract gold.

Mr Tetteh said without local collaborators, it would be very difficult for some foreigners of Asian origin to locate themselves in very remote parts of the country to engage in illegal mining.

ACOI Palmdeti said in respect of foreigners of African origin, it was also difficult to differentiate them from indigenous Ghanaians in view of their common identity in colour and sometimes language.

Environmental destruction
The illegal mining by foreigners has led to wanton devastation of farmlands, plantations, forest reserves and water bodies, and sometimes deadly clashes between them and local residents.

Many areas in the Ashanti, Western, Central, Brong Ahafo and Northern regions have been rendered desolate by the foreign illegal miners.

One name that kept popping up in the course of gathering information for this story is Hansol Mining Company, said to be collaborating with Chinese illegal miners.

The company, as the Minerals Commission confirmed, is registered to provide support services to small scale mining companies.

A Google search of the company on the Internet produced many media reports of how the activities of Chinese illegal miners working for Hansol had led to the destruction of farmlands, plantation and water bodies.

Recently, the chiefs and people of Domi-Keniago in the Amansie West District in the Ashanti Region petitioned the immediate-past Minister of Environment, Science and Technology, Ms Sherry Ayittey, to stop the company from the wanton destruction of the environment.

When contacted, the Chief Executive Officer of Hansol, Mr Ben Bosiako, admitted that his company was working in partnership with some Chinese nationals, but he denied the charge of environmental destruction levelled against it.

He also admitted that Chinese partners of Hansol are deployed to mine fields to extract gold.

He, however, explained that small scale mining was a capital intensive business and so the Chinese, after giving money and equipment to Hansol to operate, had to be on the field to ensure that their investments were recouped.

Moreover, he said, the presence of Hansol's Chinese partners on mine fields was for them to practically demonstrate the use of sophisticated equipment imported from China.

“Are you not bothered by allegations that the activities of Chinese illegal miners are destroying the environment,” I asked.

“The fact that you work at the Daily Graphic does not mean you are more Ghanaian that me,” Mr Bosiako responded.

The way forward
It appears the government's commitment to flush out foreign illegal miners has been more of rhetoric than action.

Apart from the lack of funds and logistics to keep the taskforce on illegal mining on the heels of foreign illegal miners, official complicity is rendering the government's pledge to deal with the situation as a mere blowing of hot air.

Mr Tetteh said “anytime we go to the field and see the Chinese, we hand them over to the police”.

It is alleged that after the arrest and handing over of the foreign illegal miners to the police, they are somehow released and find their way back to the mine fields.

But Mr Tetteh said, “I cannot comment on that”.
Mr Tetteh suggested the tightening of the country's immigration laws in order to manage the entry of foreigners who might come and indulge in illegal mining activities.

But ACOI Palmdeti disagreed with that suggestion, saying, the GIS could not stop any foreigner from entering the country if the person had a valid passport and visa.

“We cannot stop them on the grounds that we suspect they are going to do galamsey; it's not justifiable,” he explained.

ACOI Palmdeti said the GIS could only take entry details of foreigners at the various entry points, adding that it was difficult to monitor the purpose of their visit as declared on paper and what they actually did.

In 2012, the GIS repatriated 235 foreigners for their involvement in illegal activities, including small scale mining.

ACOI Palmdeti, however, stressed the need to make sanctions against deviants of the mining law more punitive in order to avoid the situation where after the GIS had repatriated foreign illegal miners, small scale mining companies would still be motivated to engage other foreigners.