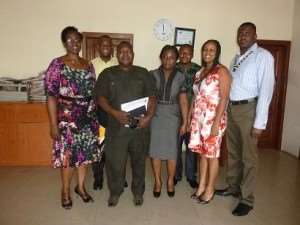 Ghana's telecom market leader, MTN Ghana, has announced that in bid to further improve upon its network services across the length and breadth of the country, an amount of $105 million will be spent this year on network upgrading and expansion.

The Corporate Services Executive of MTN Ghana, Madam Cynthia Lumor, disclosed this when she paid a courtesy call on the editorial team of The Chronicle in Accra over the weekend.

Madam Lumor revealed that since coming into Ghana in 2007, the leading telecom service provider in Ghana and beyond had spent a princely amount of $1.2 billion on the MTN network.

The outspoken MTN communication chief further disclosed that part of the $105 million investment pack would be spent on a national fibre optic cable, as well as the laying of a metro fibre cable in the Kumasi metropolis to augment data service for the people and businesses of the populous metropolis.

In addition to these, the telecom giant would also invest another fraction of the amount on 3G new telecom sites, which will bring the total of MTN 3G sites to 994, while over 200 new 2G sites are expected to be rolled out this year, according to Madam Lumor.

'All these investments are meant at providing quality telecom services to our subscribers. We are in business because of them,' she stated.

Touching on the challenges of MTN, Madam Lumor stressed that according to research there was no definite relationship between the use of mobile phone, mounting of masts, and its effects on the human being.

'This notwithstanding, there is still a perception among most Ghanaians, particularly those in the rural areas, that telecom masts have health effects. This perception makes it very cumbersome in obtaining permits to erect telecom masts in the country,' she intimated.

Madam Lumor was quick to say: 'People keep on asking why we don't co-locate. We do co-locate.  There are a lot of places that we (telecom firms) have to erect new masts. Obtaining new permit for new sites is therefore a challenge.'

But, she admitted: 'The more telecom companies share telecom towers, the more the revenue for them.'

To address the perception that telecom masts were not free from health effects, the MTN senior officials called on the media to help them (telecom operators) erase the erroneous perception, by reporting extensively on the telecom mast conundrum.

Another key challenge Madam Lumor and her team complained bitterly about was the fibre cable cut craze. They explained that MTN and its counterpart telecom operators were losing thousands of Ghana cedis daily to fibre cable cuts.

She mentioned road constructors, and lately, illegal miners, popularly known in Ghana as galamsey operators, as the major culprits of fibre cable cuts in this West African country.

When quizzed whether the telecom companies always obtained permission from the Ghana Highways Authority (GHA) and other stakeholders before laying the fibre cables, Madam Lumor answered in the affirmative.

'We write letter(s) to inform GHA before embarking on the laying of fibre cables. We have engaged the GHA and other stakeholders in a series of workshops, but the situation continues,' she lamented.

Madam Lumor, however, observed that in the past, telecom operators did not explain some of these challenges to their subscribers, but the public need to understand what MTN and other operators were going through.

According to her, fibre cuts internet connectivity, as well as calls, and said that despite these challenges, MTN was working hard to provide reliable and quality services to its subscribers.

The third challenge, Madam Lumor and her colleagues complained about, was the ongoing power crisis, which is hitting hard on the operations of MTN and several companies.

In her own words: 'For MTN and other big companies, the cost of the power crisis is greater. Our equipment are affected by the frequent power outages.

'Though, we have standby generators, the recent hikes on the prices of petroleum products further increased our cost of production,' the Corporate Services Executive of MTN Ghana stated.

To address the power crisis, Madam Lumor revealed that plans were at afoot to install solar panels in some selected areas, to help cushion the telecom giant from the nemesis of the power crisis.

On her part, the Senior Manager for MTN Ghana Corporate Communications, Mrs. Georgina Asare Fiagbenu, appealed to the media to customise some of their pages or airtime for telecom reporting.

This, she believed, would enable the media attract some sponsorship from MTN and other telecom operators in the country.

Mrs. Fiagbenu also used the occasion to urge the editorial team of The Chronicle and other media organisations to show key interest in issues affecting MTN and other telecom operators.

Adding his voice, the Media Manager at the Marketing Division of MTN Ghana, Mr. Franklin Sowa, appealed to publishers and media owners to, as a matter of urgency, rebuild the reading culture among Ghanaians, so as to boost the print industry.

Welcoming the MTN delegation, the Associate Editor of The Chronicle, Mr. Emmanuel Akli, commended MTN for extending its services to the rural areas of the country.

He advised MTN and other telecom service providers to educate Ghanaians to erase the erroneous perception that telecom masts have health effects on people who live close to them.

Mr, Akli also appealed to the management of MTN to increase their rate of advertisements in the newspapers, saying, 'We have been supporting MTN, so you should also support us.'

CAPTION: (L-R), Madam Lumor, MTN, Ebo Quansah, Editor, The Chronicle, Mrs. Fiagbenu, Ms. Falconer, Mr. Sowa, all of MTN. Standing at the back, Mr. Akli, and Mr. Kunateh, both of The Chronicle