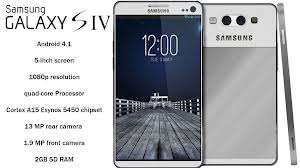 57416
Accra, March 11, GNA - Samsung will this week, ends months of speculations about its flagship Galaxy S III's successor, as it prepares finally to unveil the Galaxy S IV specs in New York, USA on March 14.

Samsung Mobile Chief JK Shin revealed at the recent Mobile World Congress in Barcelona that Galaxy S IV will indeed be shown off for the first time at an event in New York City.

Details about the Galaxy S IV is not yet known, but rumours and leaked specs say, it is coming with a unique feature that will utilize eye-tracking technology that enables users to scroll through webpages without touching the screen.

The South Korean technology giant is also this week holding its 4th Samsung Africa Forum in Cape Town, South Africa to share its products, philosophy and processes with its stakeholders as well as showcase the latest innovations across all of the company's product categories including audio visual and home appliances, mobile phones, digital cameras and IT solutions.

Earlier rumours suggest specs of the Galaxy S IV will be made known at the Africa Forum in Cape Town.

Samsung is expected to also announce its key milestones in its footprint across Africa as well as its strategy for Africa in 2013 and beyond. The strategy behind the Forum is geared to allow business partners and associates, media and government as well as consumers to experience the brand.

This year's event is to be held on the theme: 'Journey of Wonder - is fitting.'

An information note sent on the Forum sent to the Ghana News Agency in Accra on Monday says, 'The Journey promises to be filled with innovative product demonstrations, high level market insight and of course, exciting product unveilings that epitomise the future of modern technology - smart technologies that inspire the future.'

Additionally, Samsung 'will share its 'Built for Africa' visionary pillar - one that has its focus on introducing premium products designed and built with a unique understanding of the continent and the African lifestyle at its core.'

Samsung walked away with three awards at the recent Global Mobile Awards at the GSMA Mobile World Congress. The company won 'Best Smartphone' for its Galaxy S3 and 'Best Mobile Infrastructure' for its Smart LTE Networks, as well as the coveted 'Device Manufacturer of the Year' title.