Chief At War Over Goat Rearing 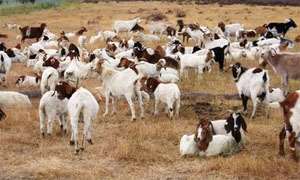 The people of Atuna, a farming community in the Jaman South District of the Brong Ahafo region, are up in arms against their chief for ordering them to stop rearing goats in the town to pacify a local shrine.

The chief of Atuna, Osagyefo Appiah-Kubi II, gave the residents up to March 31 to remove all goats in the community or face his wrath.

He threatened to order his men to exterminate all goats in the town if the people failed to comply with his orders after the deadline.

However, the residents, especially the youth, had vowed to defy the chief's orders, saying that he could not compel them to stop rearing goats because it was against their fundamental human rights.

The same chief was said to have come up with a new law ordering women who had their menstruation while working on the farm to go home for some eggs and go back to the farm to pacify the land with the eggs.

Income
According to some community elders and the youth who informed DAILY GUIDE about the current stalemate between the chief and the people of the area, the fiat had come at a time when goat rearing had become their main source of income through which most of them pay their children's school fees.

Tension was gradually mounting in the hitherto peaceful community due to the chief's orders since the youth of the town were said to be arming themselves in readiness for a face-off with loyalists of the chief who would execute the March deadline massacre of goats in the town.

The community elders told  DAILY GUIDE  that Nana Appiah-Kubi, who was installed chief in September 26, 2012, was trying to resurrect a tradition which had been abandoned for decades by his predecessors in a move to appease the local shrine.

According to the community elders, Nana Appiah-Kubi a few days after his installation, assembled the people of the town and instead of thanking them for his successful installation, rather issued a fiat that the people should evacuate all goats in the town by December 31, 2012.

They said the entire community pleaded with him to rescind the decision because it was an affront to their rights and the development of the town; and they even decided to build a new room to house the god of the shrine whose abode was burnt down by fire some years ago so that it would not be disturbed by the livestock in the town. But the chief refused to listen to them. The people however said the order failed to work because the residents refused to comply with it.

They however said the chief who was bent on implementing that abandoned tradition gave them another deadline to remove their goats by January 31, 2013 which also failed to work, leading to the current March 31 deadline.

This time around, the chief threatened to exterminate all goats in the town after March 31, a development which was likely to create mayhem and disturb the peace of the area due to the people's resolve to resist him.

When contacted to ascertain the claims of his people, Nana Appiah-Kubi, who was enraged over being contacted on phone, hurled insults on the people who informed  DAILY GUIDE  about the issue, using all sorts of unprintable words to describe them.

The chief failed to speak to the issue and rather demanded the identity of those who informed the newspaper about the developments in the town.

According to him, it was not the business of the reporter to find out what goes on in the town simply because he was not a native or resident of the town.

DAILY GUIDE  was told that goat rearing was an abomination in the Atuna community about a century ago because the local shrine did not like it.

According to the people, that taboo was broken by the predecessors of the current chief, about 30 years ago, after the death of the fetish priest of the shrine.