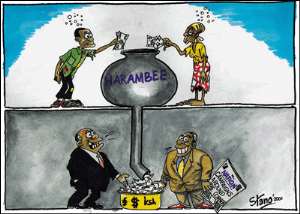 Seven ministries, departments and agencies (MDAs) could not account for almost GH¢435 million, the 2011 Auditor-General's Report has established.

The amount represented excess expenditure by the seven MDAs which was not budgeted for in the accounts of the respective MDAs.

The Public Accounts provide a means of comparing the government's actual performance against its approved budget to ascertain its performance in relation to its budget execution.

Among others, the expenditure schedule in the Public Accounts provides details of approved budget, as well as actual expenditure for all MDAs, including other independent government institutions.

Discrepancies in the financial standings of MDAs are an old canker that cost the nation millions of cedis. Ironically, the prosecution of persons found to have 'dug financial holes' in the state purse never go beyond the Public Accounts Committee of Parliament.

Between 2005 and 2006 irregularities discovered by the Audit Service during the audit of MDAs amounted to GH¢29,977,180. The abnormality was detected through regular financial and payroll audits carried out by the service. Substantial amounts of money were recovered from various persons or institutions that would have been lost.

The Auditor-General observed that the lack of effective collaboration between the Controller and Accountant-General's Department (CAGD) and the MDAs accounted for those discrepancies.

“In view of these differences, I could not ascertain the completeness of the total GoG expenditure of GH¢15,007,280,326 reported in the Public Accounts,” he said.

The report recommended that to ensure consistency in financial reporting, the CAGD should ensure that all expenditure figures disclosed in the Public Accounts were reconciled with those of the relevant MDAs.

But in a management response to the queries, the Controller and Accountant-General said, “The financial statements of the MDAs had been reconciled with the final draft of the Public Accounts and the accounts updated” for the review of the Auditor-General.

He said the challenges notwithstanding, measures, including the deployment of the Ghana Integrated Financial Management Information System (GIFMIS), the General Ledger Module for MDAs connected to the GIFMIS and the deployment of the e-transcript template for those not connected to the GIFMIS, had been put in place to ensure that all transactions were correctly captured.

The GIFMIS serves as the official system of record to meet the government's budget, financial accounting and reporting, disbursements, internal control and auditing requirements.