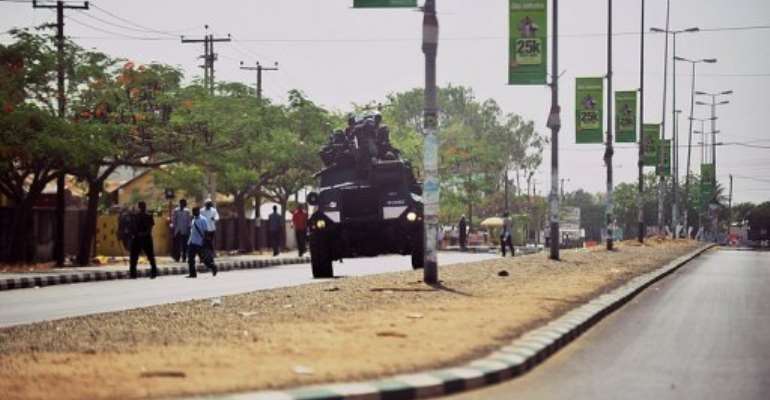 LONDON (AFP) - Britain, Italy and Greece on Sunday admitted that a claim by a Nigerian Islamist group it had killed seven foreign hostages appeared to be true and condemned the act as barbaric and cold-blooded.

The Ansaru group on Saturday announced the deaths of all the expatriates abducted from a construction site of Lebanese company Setraco on February 16 in Bauchi state in Nigeria's restive north.

Ansaru, considered an offshoot of the Nigerian Islamist group Boko Haram, backed up its claim with "screen captures of a forthcoming video showing the dead hostages," SITE Intelligence Group said.

"In the communique, the group stated that the attempts by the British and Nigerian governments to rescue the hostages, and their alleged arrest and killing of people, forced it to carry out the execution," SITE said.

British Foreign Secretary William Hague said all the hostages were "likely to have been killed" by their captors.

"This was an act of cold-blooded murder, which I condemn in the strongest terms," he said, expressing his determination to work with the Nigerian authorities "to hold the perpetrators of this heinous act to account, and to combat the terrorism which so blights the lives of people in northern Nigeria and in the wider region."

The Italian foreign ministry in a statement branded it "a horrific act of terrorism for which there is no explanation except barbaric and blind violence."

The Greek foreign ministry also said the "available information suggests that the Greek citizen abducted in Nigeria alongside six nationals of other countries is dead."

"Based on the information we have, there was no rescue operation," it added.

In an email statement sent to journalists announcing the kidnapping two days later, Ansaru said the motives were "the transgressions and atrocities done to the religion of Allah... by the European countries in many places such as Afghanistan and Mali".

Ansaru has been linked to several kidnappings, including the May 2011 abductions of a Briton and an Italian working for a construction firm in Kebbi state, near the border with Niger.

The victims were killed in March 2012 in neighbouring Sokoto state during a botched rescue operation.

It also claimed the December kidnapping of a French engineer in Katsina state, bordering Niger. The victim's whereabouts remain unknown.

Seven members of a French family, including four children, were also abducted last month in Cameroon, and Cameroon authorities said they were then taken over the border into restive northeastern Nigeria. Their whereabouts also remain unknown.

Ansaru has appeared to focus specifically on kidnapping foreigners, though it has not been known to have claimed the abduction of the French family.