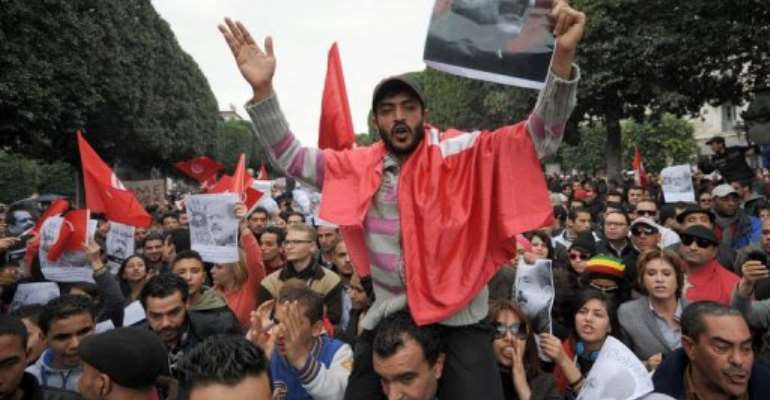 Tunisian protesters shout slogans during a demonstration on February 23, 2013 in Tunis. By Fethi Belaid (AFP/File)

TUNIS (AFP) - Hundreds of people protested in Tunis on Saturday against the Islamist-dominated regime, in a rally that was orginially planned in support of women's rights, witnesses said.

"The people demand the fall of the regime!" protesters shouted as they carried placards criticising the composition of a new cabinet announced on Friday in the latest attempt to pull Tunisia out of its worst political crisis since the revolution two years ago.

"The cabinet reshuffle was a piece of theatre," read one placard.

The new cabinet unveiled by premier-designate Ali Larayedh from the powerful Islamist party Ennahda is to replace the team of fellow Islamist Hamadi Jebali who stepped down as prime minister last month after his own efforts to form a new cabinet failed.

Larayedh, the outgoing interior minister, was tapped to form the new government in the wake of Jebali's failure to do so, following the February 6 assassination of leftist leader Chokri Belaid that plunged Tunisia into turmoil.

The proposed line-up has to be approved by the National Constituent Assembly on Tuesday.

Larayedh said his new cabinet, in which key portfolios were entrusted to little known independent candidates, in a clear concession by the Islamists, would step down at the end of the year after elections are held.

The remaining portfolios were given to Ennahda and its two secular partners from the outgoing coalition, which together control 109 out of 217 seats in the national assembly, enough to ensure a vote of confidence.

But this support is far from enough to steer Tunisia out of its worst crisis since Zine El Abidine Ben Ali's regime fell in January 2011, and to ensure support for the much-delayed new constitution.