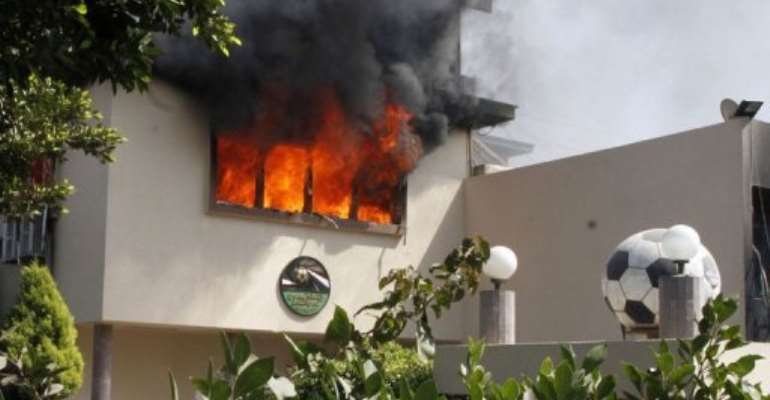 Flames rise from a room at the headquarters of the Egyptian Football Association in Cairo on March 9, 2013. By (AFP)

A Port Said court, sitting in Cairo for security reasons, confirmed death sentences for 21 defendants and handed down life sentences to five people, with 19 receiving lesser jail terms and another 28 exonerated.

Fans of Al-Ahly football club, whose members were killed in a February 2012 stadium riot in Port Said in which 74 people died, had warned police they would retaliate if the defendants were exonerated.

In Cairo, two protesters were killed -- one from birdshot and one from suffocation -- in fresh clashes with the police, a health ministry official said.

An AFP correspondent saw one protester brought to a mosque in Tahrir Square with gunshot wounds, with medics confirming he was dead.

Earlier, emergency services chief Mohammed Sultan said a protester "suffocated" after inhaling tear gas, and "died in the ambulance on his way to hospital."

Police fired tear gas and bird shot as the clashes intensified on a large avenue on the banks of the Nile, where police vehicles blocked the road.

Angry crowds hurled rocks at the police and threw a petrol bomb at a luxury five star hotel in the area that houses several embassies.

Sporadic clashes have been going on for weeks on the Nile corniche, close to Tahrir Square. The numbers swelled on Saturday when the regular protesters were joined by activists and football fans following the verdict.

Earlier, huge flames rose above the main building of the Egyptian Football Association and a police officers' club in an affluent neighbourhood on an island in the Nile.

Residents of Gezira used garden hoses to try to extinguish the flames as a police helicopter circled overhead. Windows were smashed at other buildings in the complex.

The football trial has been a ticking time bomb for Morsi, who is facing a revolt in Port Said, growing nationwide unrest and an unprecedented police strike.

The court handed 15-year sentences to the former head of police security, General Essam Samak, and to Brigadier General Mohammed Saad, who was responsible for the stadium gates, which were locked, when the riot broke out.

During sentencing, the judge read out a string of names without explaining who they were, leading to much confusion.

"First we were happy when we heard the 21 death sentences. We were cheering and didn't hear the rest of the verdict," one football supporter in Cairo told AFP. "Then we were very angry."

Any verdict in the highly charged trial was likely to trigger angry reactions.

Senior interior ministry officials said police had been put on high alert in the Sinai peninsula -- where the government has long struggled with militancy and smuggling -- in case of attacks against police stations.

In Port Said, hundreds of people prevented ferries from shuttling residents between the banks of the Suez Canal, in protest at the confirmation of the 21 death sentences against supporters of the local team.

They set fire to tyres and put up a huge banner at the entrance of the port demanding "independence for Port Said."

The Suez Canal Authority, which runs the vital waterway for global commerce, said the canal had been unaffected by the unrest.

Earlier, several hundred grim protesters had marched on the Suez Canal and a port in the city as military helicopters flew overhead and troops stationed tanks outside the port.

A lawyer for one defendants, who received a life sentence, said he would appeal.

"It's a political ruling. This judge tried to achieve a balance, but everyone is displeased with the rulings," Ashraf al-Ezzabi told AFP by phone from outside the heavily secured court room.

In February 2012, clashes in the canal city of Port Said between fans of home side Al-Masry and Cairo's Al-Ahly left 74 people dead and sparked days of violent protests in Cairo, in which another 16 people were killed.

Tension has been running particularly high in an already divided Egypt since January 26, when the court first issued the death sentences in the country's deadliest-ever football disaster.

Dissent has even reached police ranks, with police officers refusing orders to deploy, saying they are ill-equipped to deal with violent protesters and were made to suffer the consequences of government mistakes.

In Port Said, the government has almost completely lost its grip on security.

Police on Friday withdrew from their headquarters and handed responsibility for securing it to the military, deployed in the city since late January.