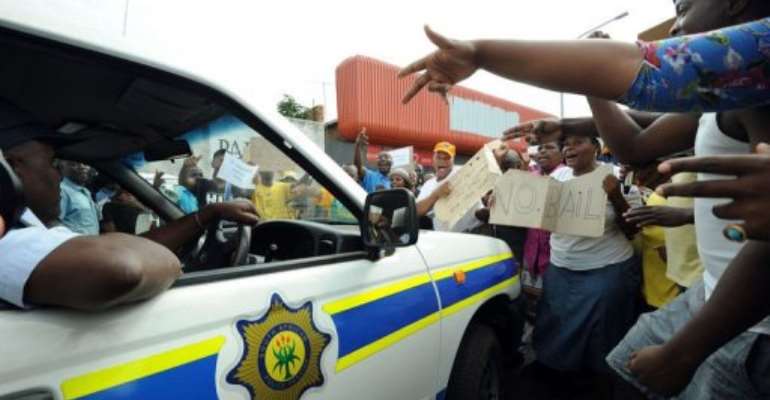 Protesters shout as a police car drives outside the Benoni court on March 8, 2013. By Alexander Joe (AFP)

BENONI, South Africa (AFP) - Nine South African policemen told a court Friday they were not guilty of murdering a Mozambican immigrant who was dragged behind a police van and then brutally beaten to death.

The group are accused of killing Mido Macia, a 27-year-old taxi driver, who died in police custody on February 26 after being confronted for parking his taxi on the wrong side of the road.

Bystanders filmed Macia being manhandled, handcuffed to the back of the van and dragged hundreds of metres in Daveyton, east of Johannesburg.

Just over two hours later he was found dead in his cell.

Footage of the incident spread quickly online and sent shock waves across the world, shining a spotlight yet again on the conduct of South Africa's much maligned police force.

According to a post-mortem report seen by AFP, Macia suffered extensive injuries, culminating in hypoxia -- a lack of oxygen supply to the body -- causing his death.

The report, conducted by pathologist Reggie Perumal, said Macia had extensive abrasions on his face, limbs and body, deep cuts on his forearms and wrists and "almost full thickness lacerations of the head."

He also had bruised ribs, back, left and right testes, lips and bite marks on his tongue as well as bleeding and water on the brain.

In bail affidavits the accused said Macia was dragged behind a police van by accident after resisting arrest and assaulting a police officer.

Police had initially claimed he was killed in a fight in his cell.

Almost all expressed "shock" and "surprise" at his death, claiming he had not complained of pain after his arrest.

When asked to move his taxi, Macia "responded by insulting me", said Thamsanqa Ncema, 35, who first confronted the taxi driver.

Reinforcements were called while a crowd gathered, allegedly throwing objects at the police.

None of the accused explained how Macia ended up handcuffed to the back of the van. And none could explain how he died.

The driver, Lungisa Ewababa, 31, said drove away when the angry crowd broke one of the van's windows.

"I decided to drive off unaware what was happening," he said.

A colleague then chased after him in another vehicle with flashing lights.

"I stopped immediately," said Ewababa, adding that he got out and looked at the back.

"A person was hanging behind the bakkie (van)."

The officers loaded Macia into the van and took him to a police station, where "he walked in on his own two feet," according to Ewababa.

Throughout the proceedings the nine huddled together on the accused's bench, some dressed in suits, others in casual clothes.

Aged between 25 and 57, some chewed gum, looked down while others occasionally shot a furtive smile.

All said they were not guilty of the charges, though they will only enter formal pleas later.

The bail hearing was adjourned until Monday.

A small group of people protested outside the court, holding posters with Macia's youthful face.

"These men have to be educated," he told AFP.

"They need to be taught how to treat the community as a representative of the state," added Macia, who discreetly sat in a back corner of the public gallery. He was due to travel to Mozambique later Friday for his son's funeral.

The state has opposed bail.

Eight officers were initially arrested over the incident. A constable who was on duty that day has since turned himself in.

"I brought him to the police station today," his advocate, Sam Leso, told AFP.

On Wednesday around 1,000 people attended a memorial for Macia at the sports stadium in Daveyton. He is due to be buried outside the Mozambican capital Maputo on Saturday.

Later on Friday around 200 people gathered at Macia's house in Daveyton for a candlelight vigil by his coffin.