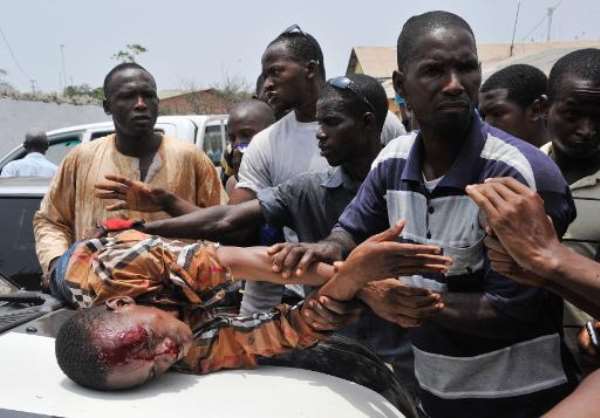 Conakry (AFP) - Security forces in Guinea killed a protester and wounded four others, witnesses said Thursday, as opposition supporters clashed with police in series of anti-government rallies in the country's largest towns and cities.

The opposition had called for a nationwide day of protest against a disputed election timetable after two weeks of violent clashes in the capital Conakry, even as the president ruled out any review.

A hospital source in Labe, the country's second-largest city and an opposition stronghold, said the victim "was beaten with batons by security forces".

The protester's body was carried to a regional hospital by fellow activists who cried "God is greatest", "death to the dictator" and "justice for all", witnesses said.

Violence between opposition activists and police in Conakry have left several dead in the last two weeks, but the demonstrators vowed they will continue unauthorised rallies against President Alpha Conde.

Conakry governor Soriba Sorel Camara made a statement on public radio ahead of Thursday's protests, criticising sections of the opposition for having "chosen the street" to make their case.

He accused activists of "acts of rare barbarity" including "stoning public and private vehicles, seriously wounding public order officials" and he urged the public to go about their normal business.

Clashes broke out at midday between demonstrators and police in the suburbs of Conakry, with at least five civilians sustaining minor injuries, witnesses told AFP.

Around the same time the government reported a "quasi-normal" security situation over most of the country but added that there had been minor violence in Conakry and Labe.

"The opposition has once again defied the law and endangered the lives of our people," it said in a statement.

Youths gathered in large crowds on the main roads in Conakry, AFP correspondents witnessed, facing off against security forces who had deployed in huge numbers in the capital and throughout the country.

Demonstrators and police also clashed in Kindia, Guinea's third-largest city and the headquarters of the country's military, 130 kilometres east of Conakry. Local media said a policeman and a protester had been wounded.

In the central town of Mamou, where around a dozen police officers were wounded in clashes earlier this week, security forces blocked the road leading to the headquarters of the main opposition party, witnesses said.

Activists in Dinguiraye, northern Guinea, vowed that they would rally despite a large contingent of security forces who had been brought in from the eastern region of Kankan, a government stronghold.

Conde said on Wednesday the country's constitution ruled out the kind of changes to the election timetable sought by opposition supporters.

"The Guinean constitution requires that presidential elections take place on a precise date," Conde told reporters after a meeting with French President Francois Hollande in Paris.

"We will do everything possible to maintain order in the republic."

Guinea's opposition boycotted parliament in March in protest over the timetable for the presidential ballot, accusing Conde of using the Ebola epidemic as an excuse to postpone voting.

The opposition had called for the local elections -- originally planned for the beginning of 2014 -- to be held before the October presidential vote but they are not due to take place until March 2016.

Opposition leader Cellou Dalein Diallo's supporters claim the timetable was pushed through without consultation and gives the ruling party an unfair advantage.

After protests in Conakry on Monday Diallo, who lost to Conde in the second round of a 2010 election, called on his supporters to take to the streets once again on Thursday, but this time all across Guinea.

Diallo said the motivation behind the president's refusal to budge on the timetable was fear of defeat if the local vote was brought forward.

"It is not as easy to commit fraud in local elections as it is in national ones -- he would not be able to justify hijacking the vote," the opposition leader told AFP.

Conde's Rally of the Guinean People party "couldn't justify victory in a presidential election" if it suffered heavy losses in a local vote, Diallo added.

Justice Minister Cheick Sako, who is charged with negotiating with the opposition, played down his leader's comments and urged the opposition not to refuse the "outstretched hand" of the government.

One of the poorest countries in the region despite vast potential for mineral exploitation, Guinea was run by a succession of autocratic rulers after gaining independence from France in 1958.