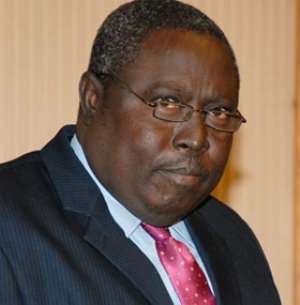 THE SUPREME Court yesterday ordered the Government of Ghana to stop any further payment with regard to a $1.3million judgment debt to Isofoton SA, a Spanish company, until the final determination of a suit before it.

The order was from a ruling delivered on an application by former Attorney-General and Minister of Justice, Martin Alamisi Amidu, praying the court to preserve the status quo on the matter by stopping the State from paying the outstanding debt to the company and Anane-Agyei Forson, its Ghanaian agent.

According to Mr. Amidu, since he initiated an action to challenge the legitimacy of the claim by Isofoton, the company had been making efforts to retrieve the balance on the debt.

Before heading for court, Mr Amidu had accused former deputy Information Minister Samuel Okudzeto Ablakwa of fronting for the Spanish company in the payment of what had become known as judgment debt.

He claimed that when he was the Attorney General, Okudzeto Ablakwa called him to lobby for the payment of the $1.3million to Isofoton.

This perhaps influenced his decision to head to the Supreme Court, suspecting that some persons in government might be benefiting from the judgment debt.

The State had reportedly paid $400,000 but defaulted in the rest of the debt, which created the grounds for Isofoton to seek a garnishee order against it at the High Court.

Mr. Amidu argued that if the nine-member panel presided over by Justice Date-Bah did not preserve the status quo, it would render his efforts fruitless, since the decision of the court would not have any effect.

The court unanimously agreed with the former Attorney General and granted his request.

The court further stayed the garnishee order by the Accra High Court which froze an account of the Ministry of Agriculture and also stayed all proceedings at the High Court concerning the case till the final determination of Mr. Amidu's substantive suit.

The matter was adjourned to April 11.
The application by Mr. Amidu received stiff opposition from Kwasi Owusu Yeboah and Kizito Beyuo, counsel for Isofoton and Anane Agyei Forson respectively.

Mr. Owusu-Yeboah, who opposed the application on procedural grounds, stated that it was improper because it sought the same effect of a stay of execution motion filed by the AG.

He argued that if it was allowed, it would lead to the duplication of the same matter before the court.

Mr. Kizito also indicated that the amount involved was not obtained through trial and that it was a compromise between the State and the company for expenses incurred following the abrogation of the contract.

The court however reminded him that Mr. Amidu was challenging the legality of the contract which he said was not put before Parliament and therefore unconstitutional.

Mr. Beyuo insisted Mr. Amidu did not describe the contract as illegal but only talked about a procedural error.

'Mr. Amidu has not suggested that the contract was illegal but has argued that it was not put before Parliament'.

The presiding judge observed, 'If an agreement is supposed to be put before parliament and it is not, then the agreement becomes null and unconstitutional'.

Principal State Attorney Sylvia Adesu did not oppose the application and later withdrew her application for stay of execution of the debt, after observing it had the same effect as Mr. Amidu's application.

The judgment debt arose from the erstwhile NPP government's alleged abrogation of a contract with Isofoton.

The contract was for the execution of the rural solar electrification project and the Agriculture Ministry had contracted Isofoton to undertake the project.

In 2008, the company brought an action against the state and obtained a default judgment.

The state, reportedly in 2009, filed processes to have the judgment set aside but later opted for an out-of-court settlement.

In the substantive suit, Mr. Amidu has sued the AG, Isofoton SA of Montalba, Madrid, Spain and Anane-Agyei Forson, seeking nine declarations including what he says is the illegal payment made to Isofoton by the government.

His case is that it was wrong for the High Court to have entertained Isofoton's suits against the Republic of Ghana on grounds that Isofoton lacked the locus standi and a cause of action to commence the action in the first place because of the absence of any operative contract with the Government of Ghana.