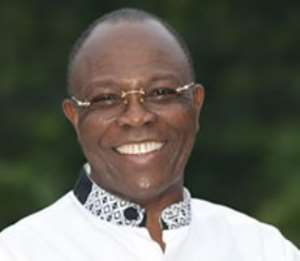 The caretaker Board Chairman of the Korle-Bu Teaching Hospital, Mr Eddie Annan is said to be busily building an empire at the hospital, bringing staff from his defunct company, MASAI Limited to fill strategic positions at the hospital.

Sources close to Eddie Annan's company MASAI Limited, have hinted that Eddie Annan has allegedly brought some people onto the hospital management structure who were staff of his company.

He is also alleged to be making plans of bringing more to fill positions after he succeeded in sacking most of the staff of the hospital, who are considered to be against his style of leadership and that of the entire management now headed by Afua Hesse.

However, Eddie Annan's style of leadership according to many people, since assuming office as the Chairman of the Board, has sent the whole Korle-Bu management structure into an abrupt nosedrive.

It is also alleged that the current Director of Administration of the Hospital, Nurudeen Mohammed, who was brought into that office by Eddie Annan-led Board, against the Ministry of Health's order, was a former staff of MASAI Limited.

It could be recalled that the appointment of Nurudeen Mohamed as the Director of Administration was greeted with stern criticism from the sector ministry with a letter coming from the office of the then Minister calling on Eddie Annan and his board to desist from bringing a new Director of Administration considering the fact that that office has been contended in court and also the advertisement placed for that position was not tailor made to health services administrators.

But, all these fell on deaf ears, as Eddie Annan went ahead to bring in Nurudeen Mohammed who is alleged to be a worker of this same Eddie Annan's company.

Interesting is another allegation which has it that Godfred Ahianyo who was handpicked by Eddie Annan to chair a three member committee to audit various processes at the Directorates and Sub BMCs and take emoluments equivalent to that of a permanent staff of the hospital, was also a staff of MASAI.

The appointment of Godfred Ahianyo as the chairman of this committee, even though he is also a member of the Korle-Bu Board, had also been greeted with contempt from the Ministry of Health, considering the fact that his appointment constitutes a clear case of conflict of interest.

Interestingly, the Supply Chain Manager's appointment was terminated under mysterious circumstances soon after assumption of office by the newly recruited Eddie Anan's crony as the Director of Administration.

Meanwhile, This Reporter gathered that the office of the Supply Chain Manager has been given to Godfred Ahianyo, who is alleged to be operating from that office.

According to sources, Opoku Akyea was sacked from that office after Eddie Annan cooked a flimsy story that he (Akyea) ordered for Oxygen to the hospital without due process and pocket the difference on the prices of the order.

However, checks conducted at the hospital indicate that the Supply Chain Manager in the person of Opoku Akyea did that to save the then CEO's head from shame, when the late president Mills was visiting the hospital.

“It doesn't speak well of us if the president was to come to the hospital and find out that there was no oxygen. So the supply chain manager had to do what he did to save us all,” the source said.

It also came up that the supply of oxygen to the hospital was given to only one company who was not regular in making supplies, and that resulted in the shortage of oxygen leaving the Supply Chain manager with no option that to order the second bidder for supplies which they did in time to save the CEO and management and also cover the incompetence and mismanagement of the affairs of the hospital.

But Eddie Annan in his crave to see to it that his cronies, employees at MASAI get to positions at the hospital to allegedly aide him in collapsing the institution, allegedly connived with members of the Board and the Acting CEO to scrape the office of the supply chain manager, rendering that office nugatory, creating the opportunity for Godfred Ahianyo.

Indeed, some staff of the hospital are at a loss as to what will be happening in the office of the newly recruited Director of Administration, in terms of supplies management, per the expected direct instructions that will be coming from Eddie Annan and his cohorts and what is to follow next.

Some staff who this reporter spoke to indicated that the office of the Supply Chain Manager is working perfectly at Komfo Anokye Teaching Hospital (KATH) and could not see the reason why a teaching hospital like Korle-Bu will at this time be thinking of scrapping that office off.

Surprisingly, it came up that government and the office of the President is oblivious of what Eddie Annan is doing at the hospital, and the way he is destroying the hospital functional organogram.

it has been gathered that on the premise of all the illegalities and mismanagement at the hospital, the then Minister of Health Hon. Alban Bagbin had on several occasions invited the Eddie Annan for discussions on how best they could salvage situations, but he (Eddie Annan) never honour any of those invitations.

But, all eyes are on the newly appointed Minister, Hon. Sherry Ayittey, hoping she will put her foot on the ground and stand against the bad management style Eddie Annan brought onto the Korle-Bu Board to employ in running the hospital into an abyss.