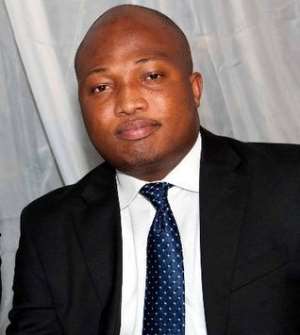 Former Deputy Minister for Information and now the MP for the North Tongu Electoral Constituency of the Volta Region, has promised to help the Aveyime Cattle Ranch at Aveyime in his Constituency to clear the aquatic weeds that has overtaken about 70% of the hand-dug well that serves the Ranch.

The MP hon. Samuel Okudzeto Ablakwa , also promised to engage the Sector Ministry for Food and Agriculture[MOFA] to see how best the Ranch that once serves as a beef meet supplier to the whole nation can be assisted to work effectively.

Hon. Ablakwa made these promises at Aveyime when he in the company of newsmen visited the Ranch as part of a fact finding tour to the Constituency and to also to familiarize himself with their operations to help assess their progress and challenges.

He also thanked the media for the commitment shown during the tour that took them to five different companies in the Constituency and further encouraged them to do a follow up on the outcome of the mission as well as sell the area which abounds in various investment potential well to potential investors and the outside world.

Welcoming the MP and his entourage to the Ranch, Mr. Charles Kofi Okyere Darko, Ranch Manager thanked the MP for recognizing the efforts being made by Management and taking time off his schedule to visit them.

He enumerated certain challenges confronting them and amongst them he mentioned the absence of the workers on the Accountants General's Department's payroll. He described it as their greatest challenge as in the whole of 2012, the workers were only paid in December.

He also enumerated the problems of water and electricity which the ranch lacks thereby making their work very difficult. He therefore called on the MP to do his best to ensure such amenities are provided to them although he hinted that the newly appointed District Chief Executive [DCE] of the Area has promised to help in that direction.

Mr. Okyere Darko, amongst other things indicated that the Ranch's 16-year old tractor needs to be replaced with a new one to make their work very effective. ''We also needs to go mobile as a ranch and as such we need a new or strong pick-up help us do our work well''.

In a brief history of the Ranch, he said the Ranch was established in 1973 as a joint venture between the Ghanaian and the Italian Governments under the auspices of the then Volta Regional Development Council with the objective of producing beef cattle for the nation.

The Italians after the project took off successfully, pulled out of the agreement after 10 years and handed over the reign of the venture ship to another foreigner, this time the European Union [EU] between 1983 and 1993.

Mr. Okyere Darko, pointed out that between these periods the Ranch at a time has around 2000 cattle before the EU pulled out of the contract and handed over to a wholly owned Ghanaian entity in 1993 which witnessed the dwindling fortunes of the Company as it struggled to pay its workers.

Government in 2006 came to the rescue and took over the ranch under the Animal Production Department of the Ministry for Food and Agriculture [MOFA], adding that a lot of strides have been made since he and his team took over in 2012.

The Aveyime Cattle Ranch currently has 10,000 hectares of land but was quick to add that there are a lot of litigation going on currently as Government did not pay any compensation to land owners upon acquisition of the land in 1973.

The Ranch Manager disclosed that the Ranch which currently has only 215 animals needs to fence its area perimeters to limit encroachment. He also appealed to the MP to help them address challenges confronting the Ranch which he is hopeful will go a long way to bring the Ranch back to its glorious days.