US Secretary of State calls for end to inequality 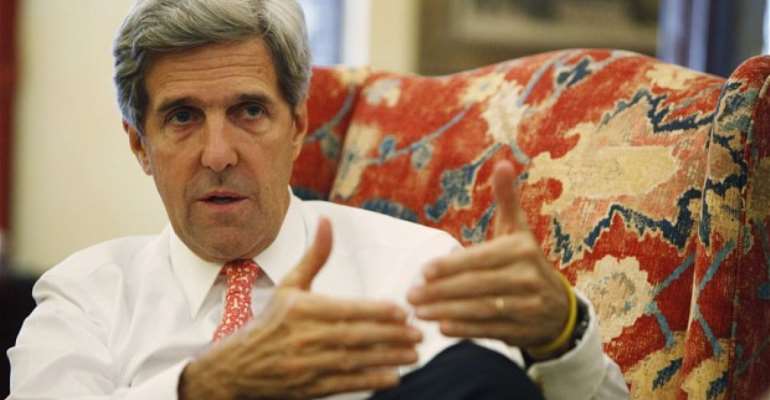 Mr. John Kerry
Accra, March 7, GNA - US Secretary of State John Kerry has called for an end to inequality that prevents progress in the world.

In a message to mark International Women's Day, which falls on Friday, Mr Kerry said the occasion was one of celebration.

'It is also a day when each of us must recommit to ending the inequality that prevents progress in every corner of the globe. We can and we must commit to this so that each of our daughters can ride the bus to school without fear, all of our sisters can fulfill their tremendous potential, and every woman and girl can live up to her full potential.'

Mr Kerry said in the message released by the US Embassy in Accra on Thursday that during his first week as the US Secretary of State, he met with 'a group of courageous women from Burma'.

Two of the women were former political prisoners, and although they had all endured incredible hardship in their lives, each of them was committed to moving forward - providing education and training to girls, finding jobs for the unemployed and advocating for greater participation in civil society.

He said he had no doubt that they would continue to be powerful agents of change, bringing progress to their communities and their country in the years to come.

'It's opportunities like this that remind us why it is so vital that the United States continues to work with governments, organizations and individuals around the world to protect and advance the rights of women and girls.

'After all, just like in our own country, the world's most pressing economic, social and political problems simply cannot be solved without the full participation of women.'

Mr Kerry noted that according to the World Economic Forum, countries where men and women were closer to enjoying equal rights were far more economically competitive than those where the gender gap had left women and girls with limited or no access to medical care, education, elected office, and the marketplace.

Similarly, he said, the U.N. Food and Agriculture Organization estimated that if women farmers had the same access to seeds, fertilizer and technology as men do, they could reduce the number of undernourished people in the world by 100 million to 150 million.

'Yet in too many societies and too many homes, women and girls are still undervalued, denied opportunities to go to school, and forced to marry as children.   Too many lives have been lost or altered forever by gender-based violence.'

Mr Kerry said as the father of two daughters, he could not imagine the pain suffered by the parents of the young woman known as 'Nirbhaya,' the 23-year old medical student murdered on a New Delhi bus simply for being a woman, or the anguish felt by the parents of Malala Yousafzai, the Pakistani girl shot by extremists as she too rode on a bus, simply for wanting to go to school.

He said he was inspired by Malala's undaunted commitment to her cause, by Nirbhaya's determination, while dying, to bring her assailants to justice, and by their fathers' courage in speaking out on behalf of their daughters and women everywhere.

Mr Kerry said no country could get ahead if it left half of its people behind and that was why the United States believed gender equality was critical to its shared goals of prosperity, stability, and peace, and why investing in women and girls worldwide was critical to advancing U.S. foreign policy.

He said the US invested in the training and mentoring of women entrepreneurs so they could not only lift up their own families, but also help their countries' economies grow.

It also invested in girls' education so that they could escape forced early marriage, break the cycle of poverty, and develop into community leaders and engaged citizens.

'Increasing girls' and women's education and their access to resources also improves the health and education of the next generation,' Mr Kerry said.

'We work with partners around the world to boost maternal health, strengthen female farmers, and prevent and address gender-based violence because all societies benefit when women are healthy, safe, and can contribute their labor, leadership and creativity to the global economy.'