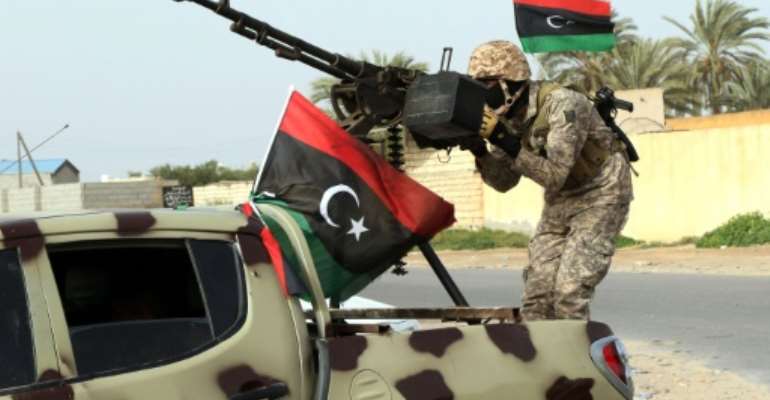 Libya has had two rival administrations since mid-2014 when a militia alliance overran the capital. By Mahmud Turkia (AFP/File)

Tripoli (AFP) - Gunmen stormed the Tripoli headquarters of satellite TV station Al-Nabaa on Wednesday night, cut its transmissions and forced out its staff, according to two journalists from the channel, which is close to the authorities in control of the Libyan capital.

"A group of armed men, some of them in fatigues and some in civilian clothing, stormed our offices and gathered the employees in one room telling them they have nothing more to do here," one of the journalists told AFP.

Programming was completely halted on the channel, half an hour after a red banner appeared on the screen that read "Urgent" and announced that "the sons and the revolutionaries of Tripoli have closed the channel of discord and instigation (of hatred)".

The message threatened to hunt down anyone working for the channel in the future.

"They took us out of the offices, took control and suspended broadcasting. None of us has been hurt," another journalist from the channel told AFP on condition of anonymity.

Earlier Wednesday the channel had aired comments by Khalifa Ghweil, head of the unrecognised authorities in control of Tripoli, demanding that Fayez al-Sarraj -- a businessman named prime minister-designate of the UN-backed unity government -- leave the capital.

Sarraj had arrived in Tripoli on Wednesday by sea from Tunisia, along with several members of his cabinet.

Members of Tripoli's unrecognised parliament had taken to Al-Nabaa on Wednesday to denounce the arrival of Sarraj and his ministers, blasting officers who allowed it to happen as "traitors".

An Al-Nabaa journalist said the armed men who took control of the channel "seemed to be in favour of the Sarraj government".