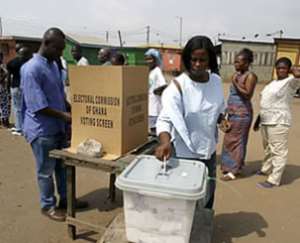 Insecurity of the police detailed at polling stations in remote areas and the antagonism between the two main political parties, the National Democratic Congress (NDC) and the New Patriotic Party (NPP), have been identified as the main challenges that negatively affected the conduct of the 2012 general elections in the Eastern Region.

The rest were low education standards of the agents of the political parties and others recruited by the Electoral Commission (EC), the transportation of voting materials and the frequent breakdown of the biometric registration equipment.

These came to light at a round-table conference to evaluate the 2012 elections in the Eastern Region in Koforidua Monday.

The event, which was organised by the EC and facilitated by Kab Governance Consult with funding from the Department for International Development (DFID) of the United Kingdom, was attended by officials of the EC, representatives of the political parties, the National Commission for Civil Education, (NCCE), the media and the police.

According to the participants, the police, especially those posted to provide security at polling stations in the remote areas, witnessed irregularities at the polls but for fear of being attacked by some of the supporters of the contesting political parties, turned a blind eye to the anomalies.

They contended that the supporters of the NDC and the NPP were also at each other's throat with accusations and counter accusations, most of which were unfounded but aired by the private radio stations and heightened the tension in the region.

The difficulties encountered in transporting election materials to the polling stations, especially the remote areas in the Kwahu North District (Afram Plains), and the frequent breakdown of the biometric machines, according to the participants, also slowed down the process.

They, therefore, called on the government and donor agencies to see how best to address such challenges to improve the conduct of the 2016 elections.

Setting the ball rolling, the Deputy Commissioner of the EC (Operations) in charge of the Eastern Region, Mr Sarfo Kantanka, said on the whole, the elections were a success except in some cases such as the remote regions where some challenges were experienced.

These, he said, included low educational standards of agents of the political parties and others recruited by the EC in remote areas. According to him, they could not simply write in words the number of votes obtained by the various political parties at the voting centres.

“On the whole, the 2012 elections which were conducted through the biometric system, despite difficulties in verifying voters and the frequent breakdown of the machines, has been very successful and we need to improve upon it,” Mr Sarfo Kantanka stated.

He ruled suggestions by some politicians for the introduction of e-voting at the 2016 polls with the explanation that an improved biometric voting system would not pose any serious challenge, adding “every election is associated with problems.”

With regard to the creation of the 45 new constituencies just before the elections, which some of the political parties opposed until the issue was settled in court, Mr Sarfo Kantanka stated that it was necessary because it could have left out some of the newly created districts without constituencies.

Mr Yorke Aidoo, Director of Finance at the EC, said his outfit was able to sensitise voters on the biometric system, establish communication links among leaders of the contesting political parties and help to build the capacity of agents of the political parties.

He, however, regretted that most of the agents trained were not the actual people who represented their parties at the polling stations on the day of the elections. He explained that the contesting political parties changed them because they feared that they would be influenced by their opponents.

On his part, the Acting Eastern Regional Police Commander, ACP James Abass Abaa, called for information gadgets that would make it possible for the police posted to very remote areas during elections to communicate with the nearest police station.

He also suggested that the electoral materials should be airlifted, especially to the remote communities in the Kwahu North District (Afram Plains).

A representative of Kab Governance Consult, Mrs Marian A. Kyei, gave the assurance that her outfit would continue to offer the necessary assistance to the EC for the organisation of future elections to consolidate Ghana's fledging democracy.