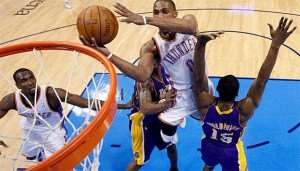 The Lakers were brought back down to reality after losing 105-122 to the Oklahoma City Thunder on Tuesday night. The Thunder were too much to handle for a team that could have had an impressive win and make a statement. Russell Westbrook led the way for Oklahoma scoring 37 points while Kevin Durant added 26 points. Serge Ibaka, who was not suspended but fined for his flagrant foul on Blake Griffin against the Clippers had 13 points with an important 3 pointer late during the game. Oklahoma are now 2.5 games behind the Spurs for the top playoff spot in the West.

Los Angeles had their problems come early when Kobe Bryant headed to the locker room early in the first half after aggravating his his right elbow. Kobe returned to the game and believed to have suffered an ulnar-nerve contusion which might be raising concern for the 34-year old in games to come. Reports also say that Metta World Peace rolled his ankle and had an x-ray after the game and seemed to be okay when talking to reporters after the game.

The injury did not slow Kobe down too much after delivering another 30 point game in the loss, but it was noticeable that he was bothered and tried to avoid dribbling with his right arm. Nash who got off to a slow start scored 20 points and World Peace added 16. Dwight Howard was not really a factor in the game with 6 points, shooting 1 for 7 and getting fouled out in the 4th quarter.

L.A was trailing by 18 points but showed fight in the 2nd half bringing the lead down to 5 points before the Thunder put them away. The Lakers, on back to back games, play tomorrow against the New Orleans Hornets, who find themselves at the bottom of the western standings and, like the Lakers, at least for now, out of the playoffs. The Hornets will not be an easy win especially with Los Angeles having little rest along with the injury that Bryant suffered but should be a win if they want to stay close to the playoffs. Utah is now at the 8th spot in the western conference playoffs and are ahead of the Lakers by 2.5 games.