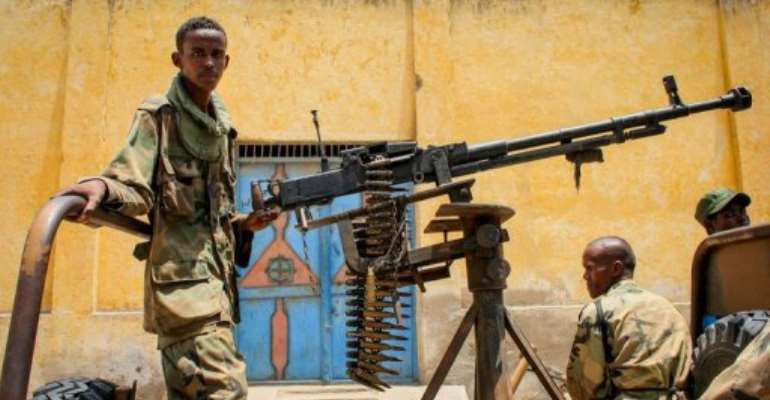 A fighter of the pro-government Ras Kimboni Brigade arms a heavy machine gun in Kismayo, on October 7, 2012. By Stuart Price (AU-UN IST/AFP)

UNITED NATIONS (AFP) - The UN Security Council on Wednesday eased the arms embargo on Somalia, agreeing on a one year partial lifting of the oldest international weapons blockade to help the new government.

The 15-member council unanimously passed to a resolution allowing light arms to be sold to the Somali armed forces as they seek to rebuild and spread government authority into territory recently held by Islamist militants.

The embargo was imposed in 1992, a year after the fall of dictator Mohamed Siad Barre as rival warlords battled for control of the East African nation.

A transitional government, backed by an African force, is just starting to establish itself after major victories against the Al Qaeda-linked Shebab group.

With US support, President Hassan Sheikh Mohamud, who took office in September, has been pressing for an end to the embargo.

Britain, France and other countries on the council had been more reluctant to fully lift the blockade because of the risk of heightening insecurity in a country already awash with arms.

Resolution 2093 allows for a one year suspension of the embargo when small arms will be allowed. The Security Council pointedly listed surface-to-air missiles, guns, howitzers and cannons and related ammunition and components as items that cannot be sold to Somalia.

The government will have to give at least five days notice of deliveries and purchases will be monitored by UN experts.

"The council has struck the right balance. It sends a positive signal to President Hassan Sheikh but it continues to give the council oversight of weapons flows into Somalia," said Britain's UN ambassador Mark Lyall Grant, whose country drafted the resolution.