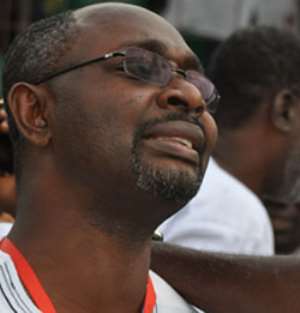 Lionel Van Lare Dosoo, the Deputy Governor of the Bank of Ghana, has told an Accra Fast Track High Court Financial Division that the letter of support given to Alfred Agbesi Woyome, the financier of the National Democratic Congress (NDC), did not amount to a commitment by the government.

He said this yesterday during the continuation of his evidence in a court presided over by Justice Najet Assam where Woyome is being tried for allegedly fraudulently receiving GH¢51.28 judgment debt  from the state.

The deputy governor, who was led in evidence-in chief by the Acting Director for Public Prosecutions (DPP), Cynthia Lamptey, explained that when a contract has not been finalized, a company can be given a letter of support to show that the government is aware of the financial support the company is seeking.

He said as the Chairman of the sub-committee on Finance of the Committee of the Local Organising Committee, they had the duty to ascertain how quickly the companies selected could organise their finances and whether or not the documents presented were genuine.

The witness, one of the two chairmen who did a presentation when the nation won the bid for Confederation of African Football (CAN) 2008, also noted that after they looked into the financial viability of Vamed Engineering, whose representative was Woyome, and a certain company called Emex, they made a valuation report on them to the Ministry of Education, Youth and Sports.

Deputy Governor Dosoo noted that he first of all recommended that Vamed, out of the two companies, should be contacted and Emex should be an alternative. This was after the committee was satisfied that the Bank of Austria indeed existed.

Under cross-examination by Osafo Boabeng, counsel for the accused person, he said said even though the letter of support had a deadline, it was stated in the letter that it was subject to extension.

He said he could not tell whether or not the recommendation letter was approved by the Ministry of Finance and also stated that he did not know that the letter was referred to the Central Tender Control Board.

Mr. Boabeng asked the witness about a certain Opoku Afare who was not initially part of the Finance Committee but later included and the reason for his inclusion.

The witness explained that Mr Opoku Afare was his personal assistant and was in charge of research at the Bank of Ghana so he was better placed to conduct research into financial viability of the two companies.

Mr. Dosoo was subsequently discharged by the court while the case has been adjourned to March 15, 2013.

The witness, at the last hearing, said he was also Chairman of the Local Organising Committee and a sub-committee which was tasked to ascertain the financial viability of Vamed Engineering and Epipherm which had bid to reconstruct the four stadia for CAN 2008.

He also stated that they were also tasked to confirm their credibility and to take proposals from both companies.

When Ms Lamptey asked the witness whether or not any money came from the Bank of Austria, Osafo Boabeng raised an objection on the grounds that the question was a leading question.

Woyome has pleaded not guilty to causing financial loss to the state and defrauding by false pretences.

Five persons have so far testified in the case including the Deputy Head of the Legal Department at the Ministry of Finance and Economic Planning, Mrs. Mangowa Ghanney, and a former Minister of Finance, Yaw Osafo Maafo.