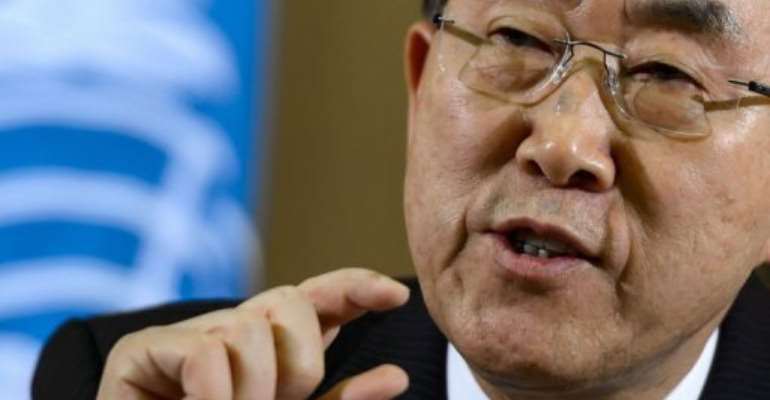 UNITED NATIONS (AFP) - UN leader Ban Ki-moon on Tuesday called for the rapid deployment of an "intervention brigade" in Democratic Republic of Congo even though he faces mounting Security Council questions over the force.

Ban and several African nations want the 2,500-strong special brigade to take on the armed groups who have brought renewed strife to eastern DR Congo.

However, some countries have expressed doubts whether it will be strong enough. Nations that have troops in the regular peacekeeping mission in DR Congo also fear the brigade could make their soldiers a target of militant attacks, diplomats said.

"I call on the Security Council to authorize the deployment of this brigade and provide it with the necessary political backing," Ban told a Security Council meeting on the strife-torn African nation.

The UN plan is to let the intervention brigade carry out "offensive operations" that are rarely in a mandate for peacekeeping forces.

The force "seeks to address the imminent threats to stability and will provide the most appropriate response to the active conflict environment" in eastern DR Congo, Ban said.

But doubts about the feasibility of the force were raised in closed consultations, according to diplomats.

"Members of the Security Council regarded this approach as bold and innovative, but there were a number of questions asked," Russia's UN ambassador, Vitaly Churkin, said after the meeting.

"A lot of hard work is ahead of us in the next few weeks," added Churkin, the council president for March.

Russia and China raised doubts about the principle of the force, according to a diplomat who was in the consultations, speaking on condition of anonymity.

Guatemala and Pakistan, council members with troops in the DR Congo peacekeeping force, expressed concerns that their soldiers could become the target of reprisal attacks, the diplomat added.

The United States in turn has doubts about the proposed intervention force's military capability to take on the armed groups such as the M23 rebels.

The United Nations and countries which support the force want a Security Council resolution allowing the intervention brigade passed by the end of March.

Rwanda, which has been accused of backing M23 along with Uganda, takes over the Security Council presidency in April.

The UN mission in DR Congo, MONUSCO, has more than 17,000 troops at its disposal, but is hard pressed to cover a country almost as big as western Europe.

DR Congo's UN ambassador, Ignace Gata Mavita, also called on the Security Council to quickly authorize the new brigade, which diplomats have said could be made up of troops from South Africa, Tanzania and Mozambique.

Mavita said the UN leader should also quickly name a special envoy for the Great Lakes region as promised under an accord signed by 11 African leaders last month.

DR Congo, Rwanda and Uganda were among countries to sign the accord, under which the 11 vowed not to interfere in the affairs of their neighbors.

Ban said that 900,000 people have now been displaced in North Kivu, the heart of the M23 rebellion, and that 2.6 million had now fled their homes across eastern DR Congo.