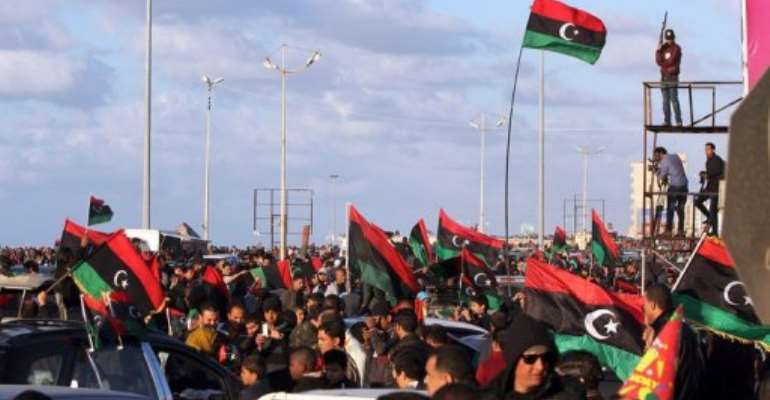 Libyans celebrate the second anniversary of the uprising against Kadhafi, on February 17, 2013, in Benghazi. By Abdullah Doma (AFP/File)

"More than 100 deputies were prevented by protesters at the end of the day from leaving the meeting room where they had been gathered to vote on the political banishment bill," Mohammed Bagi told AFP.

Bagi said the MPs had decided to postpone a vote until after amendments to the bill could be considered, but that the demonstrators "demanded that the law be adopted today."

Talks were underway to defuse the situation and allow the MPs to leave, Bagi said, adding that he was optimistic they would be successful.

The bill is controversial because it could put more than 30 members of the General National Congress out of office, including CNG speaker Mohammed al-Megeryef, and even Prime Minister Ali Zeidan.

Proposed in December, the bill would ban from politics all officials of the Kadhafi regime and their associates.

It was only earlier on Tuesday that the building housing the national assembly was returned to its members after a month-long occupation by former rebels demanding compensation for injuries in the 2011 revolution, a security official said.

Deputy speaker Jommaa Atiga and other assembly members "took possession of the premises after an agreement was struck with the former rebels," the official news agency LANA said, without giving details.

They toured the assembly to evaluate the damage after a failed raid on Sunday to evacuate the building that security officials said left four wounded among security forces. The protesters were armed and had hurled a grenade.

Footage on the Internet after the raid showed a devastated hall, with windows smashed and chairs toppled.

In a bid to pressure the authorities, the protesters had occupied the main hall of the General National Congress, the highest authority in Libya, forcing assembly members to meet in a nearby hotel.

Prime Minister Ali Zeidan has said the authorities had granted all the demands of those wounded in the eight-month conflict, offering a minimum income of 3,500 Libyan pounds ($2,750) a month as well as housing and a car.