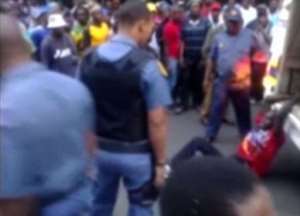 BENONI, South Africa (AFP) - Eight South African police officers suspected of the murder of a Mozambican man who had been dragged to custody behind a police van had their bail hearing delayed Monday.

The eight officers had been expected to appear in court and apply for release after being formally charged with the murder of 27-year old Mido Macia.

But the case was delayed without the defendants appearing in the dock, amid fears of them being photographed and identified.

Magistrate Samuel Makamu agreed the case will resume on Friday, once state witnesses have confirmed the identities of the accused.

The Mozambican taxi driver was filmed being manhandled, handcuffed to the back of a police van and dragged hundreds of metres to the Daveyton police station, east of Johannesburg, on Tuesday.

Just over two hours later he was found dead in custody. A post mortem found he died from head injuries and internal bleeding.

Jossefa Macia, the victim's father, told journalists after Monday's hearing that he was grateful the court process "has now started".

"We will get to the bottom of this," he said outside the court in the city of Benoni outside Johannesburg, flanked by a son and another relative.

A small crowd of around 50 people protested, singing "A Luta Continua", a rallying cry which means "The battle continues" in Mozambique's national language Portuguese.

Sofia Machabane, 39, who said she grew up with Macia, insisted the men "should stay in prison".

Footage of Macia's last hours spread quickly online and sent shockwaves throughout the country, shining a spotlight yet again on the conduct of South Africa's much maligned police force.

In it Macia, lying on his back, can be seen kicking and struggling to avoid the tarmac as the police van picked up speed.

High tensions between police and locals were evident outside the court on Monday, when the crowd chased after police who had arrested a pickpocket, thinking the officers had detained a protester.

The police had actually detained a man accused of stealing a journalist's cellphone.

"A case as serious as this, if it's managed correctly, will have a heavy sentence too," said Jose Nascimento, a lawyer appointed to represent the Mozambican government's interests.

Besides the criminal case, there would also be a lawsuit to claim damages for the family, he said outside court Monday.

Around 50,000 Mozambicans legally work on South African farms and mines, though tens of thousands of undocumented workers are also thought to live in the country.

President Jacob Zuma and the chief of police have condemned the latest incident.