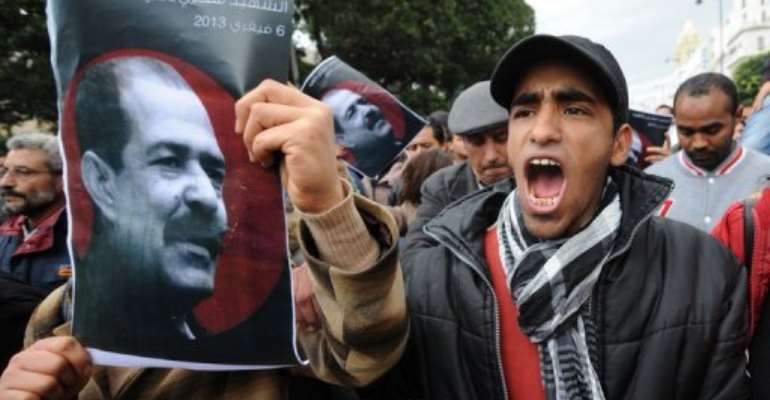 TUNIS (AFP) - Tunisia's political crisis is taking its toll on the economy of a country that is also facing growing social unrest, with credit ratings downgrades and talks with the IMF on a $1.78-billion loan still in limbo.

The north African nation fell into recession following the revolution two years ago that toppled a decades-old dictatorship, but the ruling Islamist party Ennahda boasted of an economic recovery after its rise to power in December 2011.

Ennahda hailed the 3.6 percent growth posted by Tunisia in 2012 -- 0.1 of a percentage point higher than had been expected.

But the murder on February 6 of leftist politician Chokri Belaid has plunged the country into turmoil, prompting the resignation of Ennahda prime minister Hamadi Jebali after his efforts to form a new government of technocrats failed.

Standard and Poor's was the first credit ratings agency to respond to the crisis, cutting Tunisia's sovereign rating from BB to BB- with a negative outlook, citing "the risk of seeing the political situation deteriorate further."

It highlighted "further delays in adopting the new constitution and organising elections," which it said were "prerequisites for any sustainable economic recovery."

Lacking agreement on a new constitution and therefore on new elections, Tunisia has for two years been in a phase of "post-revolution transition," offering no incentives to investors.

The central bank echoed similar analysis this week, estimating that the "firming of positive sentiment from a gradual recovery... was threatened."

Any decline in economic activity will have a negative impact on the job market, given that unemployment was a key factor in triggering the revolution and the cause of later social unrest, with some demonstrations repressed harshly.

The rise of the radical Salafist movement, blamed for an attack on the US embassy in September and the murder of Belaid, also threatens a recovery of tourism which accounts for seven percent of GDP and employs 400,000 Tunisians.

Moody's pointed out that both the escalation in violence and social unrest were putting off investors and tourists, in turn affecting the balance of payments.

The crisis also comes at a time when Tunis is negotiating a $1.78-billion loan from the International Monetary Fund to support the "transition" and help it face external "shocks."

Concluding these negotiations, although in the advanced stages, has been postponed until the formation of a new government, a task given to Interior Minister Ali Larayedh after Ennahda chose him to replace Jebali as premier.

"We will again review the situation when the new government is formed and its mandate is definite," Amine Mati, head of the IMF mission to Tunisia, told the official news agency TAP.

"Once it is formed, we will evaluate the best way to help Tunisia achieve these objectives, which aim to generate more inclusive growth and reduce unemployment."