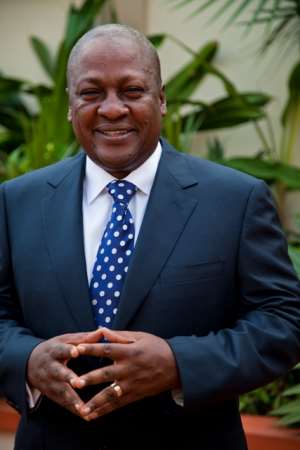 I am only asking a question of which I demand a simple answer from the person to whom it is directed or asked. Nonetheless, simple questions are oftentimes difficult to answer. Let us wait and see if John Mahama will be able to answer this simple question without stammering, stumbling or fumbling for words.

I put it to you, Mr. President, without being prejudicial and or mincing words that you ridiculously knowingly engaged in electioneering malpractices prior to, and, during election 2012. You actively involved yourself in obnoxious election propaganda because as visionless as you are, you had no credible policies and convincing messages for the electors.

As issueless as your political campaign was, and hollowness your chances of winning election 2012, you rather chose to further cheapen yourself and your political career. You went down the path of typical African incumbent leaders' understanding and ways of doing democratic politics. They mudsling their rather credible, principled and farsighted political opponents and also, rig the elections. You were not different from them, according as observed during and in election 2012. You were probably far worse.

Instead of campaigning on issues, divulging your policies; what you intend doing to better the lives of Ghanaians when elected, and what you had achieved as both the Vice President and a Caretaker-President, you did not. You rather chose to go on the attack as though, you had lost all your brains and therefore could not reason any better. You actually lost the plot.

You spent all your energies and finances paying people to cast negative advertising video clips which were replayed non-stop by the audiovisual media houses in the country, especially TV3. All the insanely -made numerous advertisements were just for attacking Nana Akuffo-Addo's education policy of Free Senior High School that had come to electrify Ghanaians. The Free Senior High School had become an effective electioneering campaign policy that was garnering winning votes for Nana Akuffo-Addo and the NPP. The best the clueless then caretaker-President could do was to mount a series of obnoxious audiovisual advertisements to mitigate or truncate the hooking effect of the Free SHS on Ghanaians.

You depleted the entire State coffers to finance your electioneering campaign and the roguish NDC party. You used the State funds as if it belonged to you and your party alone, to buy cars to dish out to University female students, chiefs, party supporters etc. Your party also went on voter-card purchasing spree (GHC500 per card) in attempts to disenfranchise likely NPP voters. After all these efforts you expended in the hope of winning election 2012 overwhelmingly genuinely, you still had to end up rigging the election in your favour.

Ghanaians were not stupid to tell how incompetent and visionless John Mahama was, concluding from the nauseating negative-loaded advertisement of "Ebe dii bi keke (ede bii keke)" that he mounted against Nana Akuffo-Addo's flagship Free SHS education policy. They were also not stupid to fail to see how corrupt the NDC government and party were. Dubiously availing themselves of monies they were not due via judgment debt payments.

I will end here to swiftly proceed to attack Alfred Agbesi Woyome before I revert to discuss how I see you in my quick-to-follow write-up.

The author has 2090 publications published on Modern Ghana.