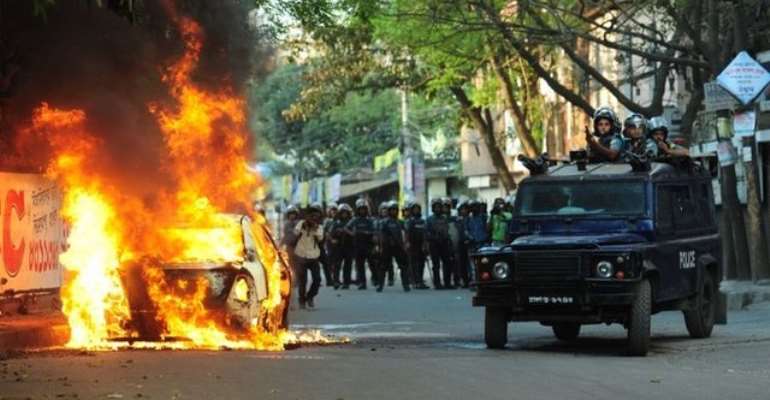 Clashes Have Broken Out In Cities Including The Capital, Dhaka

At least 16 people have died in clashes in Bangladesh at the start of a strike called over a death sentence given to an Islamist party leader.

Delwar Hossain Sayeedi, of Jamaat-e-Islami, was sentenced on charges including murder, rape and torture during the war of independence in 1971.

Thursday's sentence sparked riots that have left about 60 people dead.

The Islamists say the tribunal is politically motivated, something the Bangladesh government denies.

Jamaat-e-Islami called a two-day strike across the country, beginning on Sunday, in protest at the court ruling.

Troops were called in in the northern district of Bogra, where police said thousands of Jamaat activists armed with sticks and home-made bombs attacked police outposts early on Sunday.

At least eight people were killed and dozens hurt in clashes in the district.

There were at least two further deaths in the north-western town of Godagari.

Border guards and police opened fire on protesters who were attacking police with sticks and stones, an official told the news agency AFP.

And another three people died in the Joypurhar district, the Daily Star newspaper said.

The BBC's Anbarasan Ethirajan in the southern city of Chittagong says there has been no let up in the violence since the death sentence was issued.

Police have fought pitched battles with supporters of the Islamist party in many parts of the country.

Three people were killed in Chittagong on Saturday and Jamaat-e-Islami has accused the police of firing without provocation.

The Bangladeshi government rejected the criticism, saying violence against civilians and police officers would not be tolerated.

'Very afraid'
In the capital, Dhaka, on Saturday, activists clashed with riot police, who used tear gas and rubber bullets to disperse them.

One of the city's residents, Jahangir Alam, told the BBC he had seen a bus burning on the street.

"The police were trying to control the situation, but they were having stones and other objects throw at them," he said.

"People in the street are very, very afraid of Jamaat-e-Islam. I am scared. Evening time is the worst; from 7pm to 9pm it is very dangerous in the street."

Our correspondent says the intensity of the backlash against the sentences has surprised many in Bangladesh, and security forces are struggling to bring the situation under control as it is difficult to predict which districts the violence will spread to.

The streets of the capital remain largely calm as the strike takes effect, although roads are empty and businesses closed in many parts of the country, with people are staying indoors for fear of more violence, he says.

The US has expressed concern about the violence and has appealed for the protests to be peaceful.

The special war crimes tribunal is trying those accused of collaborating with Pakistani forces and committing atrocities during the country's independence war in 1971.

The tribunal is trying a total of nine Jamaat leaders and two members of the opposition Bangladesh Nationalist Party (BNP). The BNP has also called for a nationwide strike, to take place on Tuesday.

Earlier this month, another Jamaat leader, Abdul Kader Mullah, was sentenced to life for crimes against humanity.

In January, former party leader Abul Kalam Azad was found guilty in absentia of eight charges of crimes against humanity and sentenced to death.

However, human rights groups have said the tribunal falls short of international standards.

With Jamaat threatening more protests, there are increasing concerns over political stability in the country, our correspondent says.