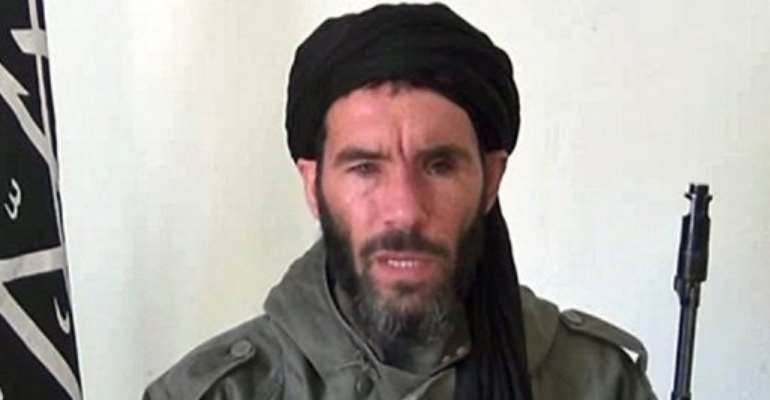 N'DJAMENA, Chad (AFP) - Chad said its troops in northern Mali on Saturday killed the one-eyed Islamist leader who masterminded an assault on an Algerian gas plant that left 37 foreign hostages dead in January.

The Chadian army, whose troops have been at the forefront of the hunt for Al Qaeda-linked fighters hiding in northern Mali, said Mokhtar Belmokhtar was killed during an operation in the Ifogha mountains.

The Algerian national, a ruthless Afghanistan veteran whose smuggling activities earned him the nickname of "Mr Marlboro", had broken away from Al-Qaeda in the Islamic Maghreb (AQIM) weeks ago to form a group called Signatories in Blood.

The report of his death came after Chadian President Idriss Deby Itno announced on Friday that his forces had killed Abou Zeid, the top AQIM commander in Mali, a few days earlier. A Mauritanian news agency said he was killed by a French airstrike.

If the deaths are confirmed, the French-led military coalition fighting in northern Mali will have eliminated the Sahel region's two historical Al-Qaeda leaders and decapitated the jihadist insurgency in Mali.

"The Chadian forces in Mali completely destroyed the main jihadist base in Adrar of the Ifoghas mountains" at 1200 GMT, an army statement said, adding that several militants were killed "including leader Mokhtar Belmokhtar".

Belmokhtar, 40, was seen several times in the main northern Malian cities of Timbuktu and Gao after AQIM and its allies took over northern Mali in April 2012.

He quit AQIM last year and in December the creation of his new group was announced.

In January, days after France's surprise decision to send in fighter jets and troops to help the Malian government reconquer the north, Belmokhtar claimed the attack on the In Amenas gas plant in southern Algeria.

The spectacular attack on the isolated facility, which was jointly operated by British, US and Norwegian oil companies, ended in a bloodbath, with 38 hostages killed by the time an Algerian raid ended the crisis.

Among the victims were 37 foreigners, from Britain, Norway, Japan and other nations.

No other source has yet confirmed Belmokhtar's death, and foreign governments were still trying to confirm that Belmokhtar's ex-boss in the AQIM hierarchy, Abou Zeid, was indeed dead.

It said Abou Zeid, 46, one of the most wanted men in Africa, was killed "four days ago" in a French air strike during a clash between a unit he was leading and the Chadian platoon that had suffered the 26 losses days earlier.

Sahara Medias said the strike occurred in the mountainous region of Tigharghar near the border with Algeria and added that "extremely well-informed sources" had confirmed Abou Zeid's killing.

-- No confirmation in jihadist Internet forums --

Analysts have suggested Abou Zeid's death could spell AQIM's doom, with breakaway jihadist groups and other radical Islamist movements now thriving in the region. But while Washington described the report as "very credible", France has so far treated it with caution.

Algeria's El Khabar newspaper said Saturday that Algerian security services, who were the first to report Abou Zeid's death, had found his personal weapon and examined a body believed to be his.

"Confirmation of Abou Zeid's death remains linked to the results of DNA tests done on Thursday by Algeria on two members of his family," it said.

Mauritanian expert Mohamed Mahmoud Ould Aboulmaali pointed out that Algeria had announced his death several times in the past and that Chad needed morale-boosting news after suffering such heavy losses.

Matthieu Guidere, a French university professor and Al-Qaeda specialist, also voiced caution in the absence of any confirmation on jihadist Internet forums.

"Experience shows that jihadists never try to hide their dead and immediately broadcast their martyrdom," he said.

Abou Zeid was believed to be holding a number of Western hostages, including four French citizens kidnapped in Niger in 2010.

He and Belmokhtar were directly involved in most of the kidnappings of foreigners that have plagued the region in recent years.

Guidere said Abou Zeid had adopted such a hard line since reaching the top of AQIM's operational command that many of his lieutenants had left the group to join other organisations or launch their own.

One of the main splinters is the Movement for Oneness and Jihad in West Africa (MUJAO), which first emerged last year and was battling African forces near the main northern city of Gao as recently as Friday.

"We'll see later about the death toll," he said.

A Malian soldier who claimed he took part in the fighting said the operation had left a MUJAO base destroyed and "many dead" among the Islamists.