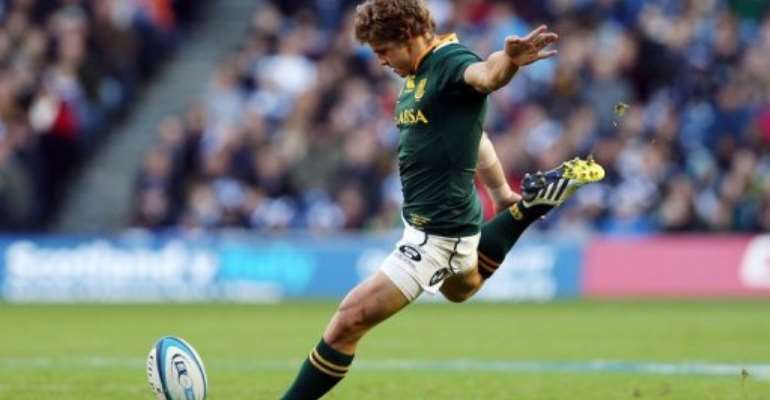 DURBAN, South Africa (AFP) - Patrick Lambie won the battle of the boot against Joe Pietersen Saturday to give Sharks a 12-6 victory over Western Stormers in a fiery, forward-dominated Super 15 clash.

Springbok fly-half Lambie succeeded with four of five penalty attempts at wet Kings Park while full-back Pietersen planted both his penalty opportunities between the posts in the clash of South African titans.

Sharks continued a good start to the southern hemisphere championship after a seven-point victory at Central Cheetahs last weekend in which Lambie contributed 19 points.

It was the second successive loss for Stormers after an eight-point reverse at Northern Bulls last Saturday and it does not get any easier for them next weekend with title holders Waikato Chiefs playing in Cape Town.

Chiefs issued a warning to all South African rivals this weekend when they ran riot in the second half at home to crush Cheetahs 45-3 and move into second place on the combined standings behind the Australian Brumbies.

Despite the presence of Springbok wings JP Pietersen and Lwazi Mvovo of Sharks and Gio Aplon and 2012 South African Player of the Year Bryan Habana of Stormers, they rarely touched the ball on attack during a battle of attrition.

"We showed incredible guts tonight to come through," boasted Sharks centre and acting captain Francois Steyn. "Failing to score in the first half did not concern us as we knew this match was going to be all about defence.

"While there is room for improvement, we have made a good start to the season and I believe the team can go far. The key now is to grow as a squad and make up for the Super 15 and Currie Cup final defeats last season."

Stormers captain and centre Jean de Villiers had mixed feelings: "We played much better than last weekend when losing to the Bulls, but it is another defeat.

"Although the conditions were difficult, we were beaten by a better team in a game that contained an awful lot of kicking. We made far too many handling errors in our half."

The first half flew past without a single point and some in the crowd wondered if they were about to witness the first point-less draw in the competition.

But the deadlock was finally broken on a slippery pitch two minutes into the second half when Lambie atoned for an opening-half miss by steering the ball just inside the left post.

Pietersen levelled from an angled 22-metre shot and later cut the deficit to three points after Lambie had slotted two more penalties for the 2012 Super 15 runners-up.

Another Lambie penalty on the hour mark closed the scoring ahead of a tense finish with Sharks looking the likelier winners but Stormers always a converted try away from snatching a victory they hardly deserved.