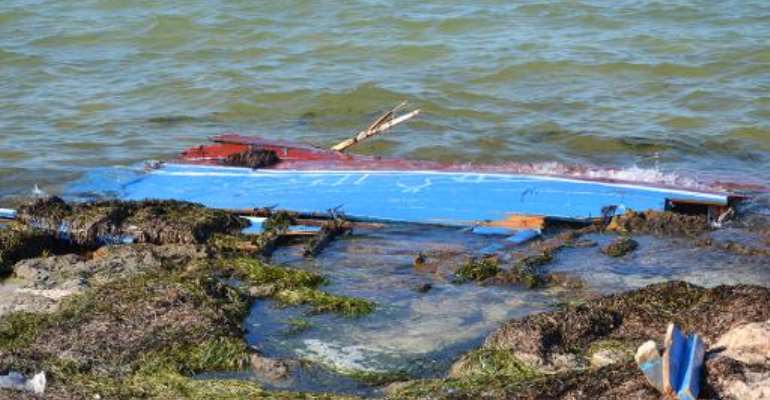 A picture taken on August 29, 2014 shows what remains of a boat carrying illegal migrants from Libya that sank off the shores of the coastal town of Ben Guerdane, in southeast Tunisia. By F. Nasri (AFP/File)

"Forty-two bodies have been recovered: 31 were buried on the spot and 11 others will be during the day," said Tahar Souid, coordinator of the emergency centre set up at Ben Guerdane in southeast Tunisia where the first bodies were discovered on Friday.

By Saturday evening when the search was called off for the night, the body count from the sinking, thought to have happened off the Libyan coast, had reached 41.

Rescuers "have found Syrian identity papers", Souid said, in the first indication of the victims' nationality.

Many of the bodies, some still with life jackets on, have washed up on the Tunisian shore.

However, operations were complicated on Sunday by a strong wind from the southwest blowing the remaining bodies offshore and fisherman reported finding more bodies in the sea, he said.

The victims were found in an area that has seen many boatloads of illegal migrants capsize.

The director of El Ketf port, Fethi Abaab, said on Saturday that women were among the cadavers.

A rescue operations official said the bodies were badly decomposed and added that he believed they were migrants who had been trying to make their way to Europe in search of a better life.

They were "probably" some of the people who went missing earlier this week when a boat capsized after leaving the Libyan port of Zwara, heading for Italy, the official said.

Mired in unrest and political chaos, Libya has been a launchpad for illegal migrants trying to reach Europe and who turn to people smugglers to cross the Mediterranean, mainly to Italy.

Last week, Libyan rescuers recovered the bodies of around 170 people after a vessel carrying illegal immigrants from sub-Saharan Africa sank, the coastguard said.

The International Organisation for Migration has warned that unrest in Libya could lead more migrants to risk their lives and take to unseaworthy boats to try to reach Italy.

The UN's refugee agency the UNHCR says more than 100,000 people have made it to Italy by sea since the start of the year.

Ex-I.Coast president Gbagbo warns of 'disaster' in upcoming ...
32 minutes ago