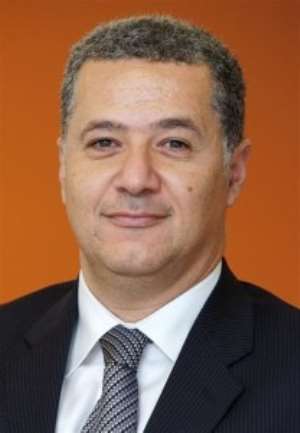 Mr. Famamwy's visit will be at the invitation of Rlg Communications Limited, the pioneer ICT Devices Assembler in Africa, based in Ghana.

Whilst in the country, Mr. Famamwy will be the Guest of Honour at the official Sod Cutting Ceremony for the multi-million dollar ICT Park, to be known as the Hope City in Accra next month. He will also pay a courtesy call on President John Mahama at the Flag Staff House.

The Hope City Project is an integrated village with facilities for housing, ICT, Recreation, Business and many more, and is expected to create jobs for more 50,000 people directly and indirectly.

In August last year, Microsoft and Rlg signed an agreement which allows Rlg phones and computers to run on Microsoft windows. The most influential business magazine, Forbes, in one of its publications described the Rlg-Microsoft deal as the 'partnership of the future'.

The deal also granted an Original Equipment Manufacturing (OEM) status to Rlg Communications Limited, making it one of the few in Africa.

'This visit by a very senior official of Microsoft excites us because its reaffirms the growing trust and confidence the international community is reposing in us', said Mr. Roland Agambire, Founder & Chief Executive of Rlg Communications Ltd.

Mr. Ali, who is also the President for Microsoft Middle East & Africa (MEA), has a number of responsibilities spanning business strategy and operations. He is a key member of the international leadership team that is responsible for the company's global strategy, with a particularly visible role amongst the company's worldwide emerging market community.

Ali is directly responsible for Microsoft's operations in MEA, one of thirteen areas that comprise Microsoft's worldwide operations. The Area represents one of Microsoft's fastest growing and dynamic markets and certainly its most diverse one. Microsoft MEA operates through 32 offices and covers 79 countries across three continents.

Throughout his twenty year career in the IT industry, Ali has held different technical, sales and managerial roles in different parts of the Middle East and in Europe with companies including Dun & Bradstreet Software, NCR Corporation, Yokogawa Marex and finally Microsoft Corporation,

Ali joined Microsoft in October 1997, as the General Manager of Microsoft Egypt. After a successful four years in that role, he assumed additional responsibilities for the area of Eastern- Mediterranean, which encompassed Egypt, Lebanon, Jordan, Cyprus and Malta.

In May 2002, Ali was named as the Regional Director for sales, marketing and services for a newly consolidated Microsoft Middle East and Africa region.

Ali graduated from the Faculty of Engineering, Alexandria University, majoring in Computer Science & Automatic Control and has a MBA in Strategic Marketing from the University of Hull in the UK. He is married and has two sons.

He loves the IT industry and its impact on empowering people and transforming industries. He is passionate about the future of people in emerging markets. He also enjoys music, reading and the occasional round of golf.