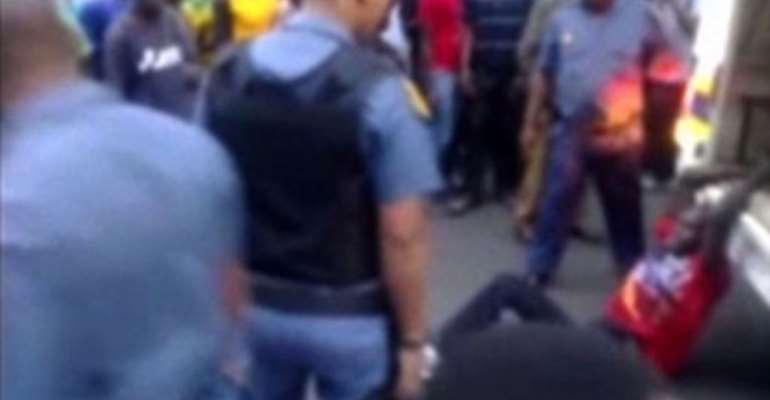 An amateur video image shows a Mozambican taxi driver handcuffed to a police van in Daveyton on February 28, 2013. By (The Daily Sun/AFP)

PRETORIA (AFP) - South Africa's police commissioner on Friday suspended eight police officers who are accused of dragging a taxi driver behind their patrol car and killing him.

Commissioner Riah Phiyega said that the eight officers had been disarmed and suspended and the station commander had been removed from his post.

Twenty-seven-year-old Mozambican taxi driver Mido Macia was filmed being manhandled and dragged by a police van through the streets to a police station east of Johannesburg, prompting public fury.

Just over two hours later he was found dead in custody.

A post mortem found the cause of death was head injuries with internal bleeding.

The Independent Police Investigative Directorate has opened a murder investigation.

Phiyega condemned the incident and insisted it was being thoroughly investigated.

"Any one death is one too many," she said in a press conference. "We believe in the principal of police being policed."

Footage of the incident spread quickly online, sending shockwaves through the country and put the conduct of South Africa's much maligned police force back in the dock.

The country's beleaguered police service has been pilloried for the shooting deaths of 34 striking miners last August.

It was also humiliated when it emerged that the officer investigating the murder case against star sprinter Oscar Pistorius himself faced charges of attempted murder for shooting at a taxi.

"They are criminals in uniform," Bongani Hlela, a street trader based at the taxi stand where the Macia incident occurred earlier told AFP.

The Independent Police Investigative Directorate received 720 new cases for investigation of suspicious deaths in custody or in other policing contexts from April 2011 to March 2012, according to Amnesty International.

Phiyega insisted that the force had not lost the trust of South Africans and had a "dedicated leadership."

"Yes there are challenges and we shall deal with them decisively openly and accurately."