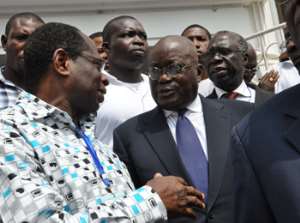 The ruling National Democratic Congress (NDC) yesterday filed its amended response to the election petition filed by the opposition New Patriotic Party (NPP) on February 12, 2013, describing it as “frivolous, and vexatious”.

The amended process filed by the NDC, and available to DAILY GUIDE, is in response to the December 28, 2012 election petition filed by the NPP and amended on February 12, 2013.

In the amended 27-paragraph response, aided by an affidavit endorsed by Johnson Asiedu Nketia, General Secretary of the NDC, the ruling party stated that the NPP's amended petition is an abuse of the processes of the Supreme Court.

The NPP had submitted “overwhelming evidence” from 4,709 stations across the country where it believed massive irregularities were overlooked by the Electoral Commissioner (EC).

But early February, the NPP told the Supreme Court that it had uncovered more irregularities in approximately 11,916 polling stations out of the more than 26,000 polling stations where Presidential and Parliamentary elections were conducted in December 2012.

The NPP thus sought leave of the Supreme Court to amend its earlier petition to include the new evidence.

The Court agreed; and the NDC, which had earlier responded to the old petition, also applied to amend its response.

Originally, the NPP filed its petition based on evidence from 4,709 polling stations nationwide and a resultant questionable votes of a little less than one million out of the 10.9 million votes cast during the elections.

However, the NPP explained to the apex court of the land that it had discovered more irregularities affecting almost 12,000 polling stations with votes of up to 4,670,504 out of the 10,995,262 “valid” votes cast.

The NPP argued that when it made its discovery, it had to quickly present the evidence at the time to be able to meet the mandatory 21 days recommended for election petitions to be filed in the Supreme Court against any election.

However, after the filing of the NPP petition, it continued to scrutinize the results which yielded more irregularities.

In the amended petition therefore, the NPP is asking the court to annul all the invalid votes in 11,916 polling stations.

But the NDC response claims these calculations are bogus numbers aimed at making the NPP's case look good in the Supreme Court.

Same Arguments
Indeed, the content of the amended response was hardly different from the first response filed by the NDC on January 28, 2013. The response was merely a reinforcement of their earlier response, taking into consideration the new numbers that the NPP has churned out in its amended response.

For instance, in raising the argument that agents of the political parties were present during the elections and were satisfied with the results, the NDC, in its January response, stated, “Petitioners, through the acts of their polling agents at the various polling stations as well as acts of other representatives, clearly acknowledged that the presidential elections were validly conducted and claims to the contrary now by the petitioners are an afterthought and in bad faith and cannot be countenanced.”

The NDC raised the same point in the 21st paragraph of its amended response, stating; “3rd Respondents [the NDC] states that voters went through a process of verification and had their identity checked before casting their votes.

3rd Respondent states further that the agents of 1st Petitioner [Nana Addo Dankwa Akufo-Addo] who were present at all polling stations including the 11,916 polling stations, were satisfied with the verification process and it is belated.”

The NDC is also arguing that the NPP cannot keep debasing the results of the Presidential election while accepting the Parliamentary elections which were held concurrently with the Presidential one.

“Petitioners and their party cannot consistently claim that the Presidential elections were conducted irregularly, in respect of voter verification, for instance, while acknowledging the validity of the Parliamentary elections on the basis of which Members of Parliament from their party have taken their seats in Parliament,” the party rationalized.

The NDC also argued that international and local monitoring groups have okayed the election, hence their confidence in the result declared by the Electoral Commission, headed by Dr. Kwadwo Afari Gyan.

“The Coalition of Domestic Election Observers, whose membership includes representatives of various professional groups (including the Ghana Bar Association), also issued a report not only declaring the elections as having been generally free, fair and transparent but also, using its well-established methodology for verification of the results, confirming the tally of the 2nd Respondent [the Electoral Commissioner]”.

The Joinder
Even though the actual date of hearings on the substantive issue of the election petition have not been set, the amended response of the NDC is one of the major steps that will pave the way for proceedings to begin on the landmark election challenge.

Initially, the NDC was not part of the respondents to the petition, but the party argued passionately to be joined to the lawsuit. The Supreme Court, on January 22, 2013, by a 6 – 3 majority decision, granted the application for joinder brought by the governing party.

The petitioners, Nana Akufo-Addo (presidential candidate of the NPP), Dr. Mahamudu Bawumia (running mate to Akufo-Addo) and NPP Chairman Jake Obetsebi-Lamptey, initially roped in only the Electoral Commission and the direct beneficiary of the election, President John Dramani Mahama.

Mahama's Response
Meanwhile, President Mahama has also responded to the petition in a 29-paragraph submission to the Supreme Court.

Excerpts of the President's response to the petition stated that “the first respondent, President John Mahama shall in this case contend further or in the alternative as follows; i. Finger print verification is not the only means of verification permissible under the law in terms of Article 42 of the 1992 Constitution; failure if at all by eligible voters to undergo finger print verification as a result of the breakdown of equipment cannot be the basis of denying such voters of their constitutional right to vote.”

The response continued, “The first petitioner had or ought to have had polling agents at the various polling stations who were part of the prescribed voter identification process prior to voting, the said polling agents having participated in that process and having after public and transparent counting, certified the results of the polling stations and all constituencies by signing without protest.”

Allowance For Workers Who Lost Job Due To Covid-19 — Mahama ...
7 minutes ago

Ghana Back To HIPC Not Surprising, Spending 46% Of Tax Reven...
25 minutes ago