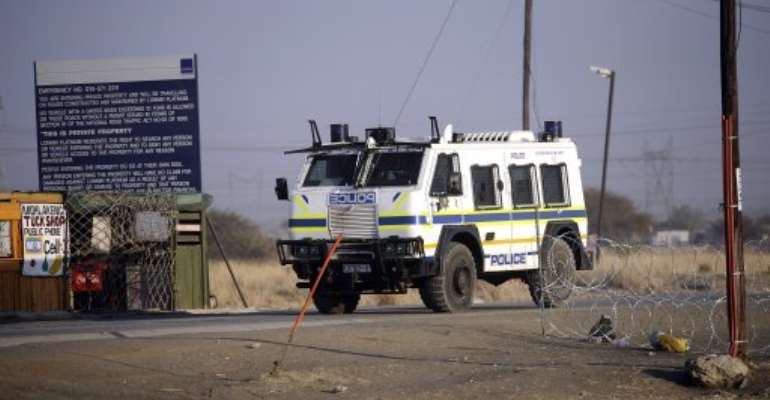 A police vehicle parked outside the Marikana platinum mine on August 21, 2012. By Stephane de Sakutin (AFP/File)

JOHANNESBURG (AFP) - South Africa's police watchdog is investigating the death of a Mozambican man who died in custody after being dragged behind a police vehicle, a spokesman said on Thursday.

Media reported that police initially beat up the 27-year-old taxi driver from Daveyton, east of Johannesburg, accusing him of parking his vehicle incorrectly.

A video footage taken by a bystander, shows him being handcuffed to a police van and dragged through the streets, in front of a large crowd.

Police officers in uniforms are visible in the video shown on national television.

He was later taken into custody, where he died.

"We are investigating an incident involving the death of man, allegedly at the hands of the police. We are shocked by the footage which has been released," said Independent Police Investigative Directorate spokesman Moses Dlamini.

"The circumstances surrounding his death are still allegations... let's find out what really happened," he said.

He said there were reports the man had tried to disarm a police officer before the attack.

The beating allegedly continued inside the police holding cells before his death.

Police in South Africa are known for heavy handedness when dealing with the public, and the police watchdog is handling numerous cases of police brutality.

Dlamini said only the police department had the power to suspend the police officers involved in the incident, not the watchdog.

"We can only investigate and recommend suspension, we have no power to say that they should be removed from their jobs," he said.

The police department could not confirm if the officers had been suspended.