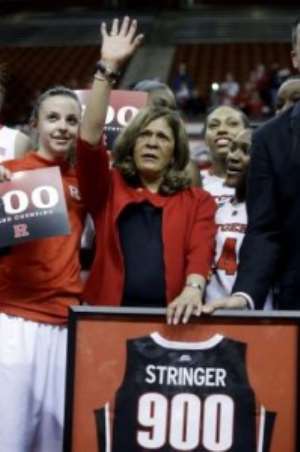 After all said and than on Tuesday C. Vivian Stringer who has been counting for 42 year a head basketball coach, reached the exclusive 900-win club when her Rutgers team snapped a four-game losing streak with a 68-56 victory over South Florida in Piscataway, N.J.

Furthermore, Stringer held back tears as she became just the seventh coach to join the club and the fourth in women's basketball history. She joins Pat Summitt, Jody Conradt, and Sylvia Hatchell, along with men's coaches Jim Boeheim, Bob Knight, and Mike Krzyzewski.

'I think it's beyond words,' said Stringer: 'I'm happy that it's over. I can hardly breathe. It's over and now I can just coach and smile, and get back to what I love to do because it's never been about numbers.'

'If it's something special for all the generations of players and coaches that I've been a part of, then, yeah, I'm happy. But I'm looking forward to more.'

She has now amassed an overall record of 900-330 in her time as a head coach and has take three different programs to the Final Four. In addition to taking the Scarlet Knights to the Final Four in 2000 and 2007, she has also led Iowa there in 1993 and Cheyney State College in 1982.