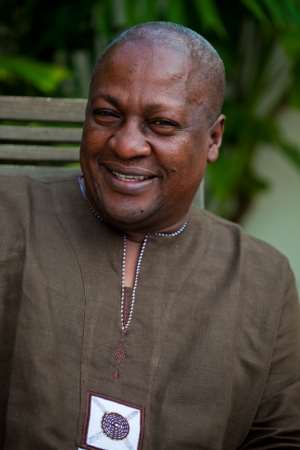 Kpong (E/R), Feb. 26, GNA - President John Dramani Mahama, in fulfillment of his promise to ensure regular supply of water in the Accra/Tema Metropolitan areas, Tuesday undertook a day's tour to acquaint himself with the challenges in the water sector.

The tour took him to the Weija Water Treatment Plant in the Greater Accra Region, the Kpong Water Works in the Eastern Region and Bui in the Brong Ahafo Region to ascertain the extent to which the hydro-dam had been executed.

As part of the tour, President Mahama also took time to inspect the on-going expansion projects at the water treatment plants.

He also interacted with the workers and managements to know their challenges and find solutions that would return regular supply of water to the beneficiary communities.

President Mahama, during his presentation of the State of the Nation Address in Parliament last Thursday, promised that his administration would, in the coming months, work hard to augment water production at the various water treatment plants to reduce the current water rationing in the Accra-Tema Metropolis.

At the Weija Water Treatment Plant, President Mahama gave the assurance that his administration would provide the necessary support that would enable the facility to produce its maximum capacity of 52 million gallons per day to stem the regular interruptions.

President Mahama said government would also support the Urban Water Programme to stem the lost resulting from illegal connection over the years and urged the management and staff to play their roles responsibly to curb the perennial loses.

He said government would provide the necessary funding for the Ghana Water Company to replace all the damaged and old filters which had accounted for production deficits in the metropolis resulting into water rationing a couple of weeks ago.

The President also inspected the Kpong Water Treatment Plant and expansion projects, which are expected to produce a maximum of 80 million gallons a day, where over 50 percent of the work had been completed.

He said the expansion programme at Kpong and the replacement of filters and major additional works at the Weija Dam would subsequently ameliorate the plight of people living in the region to enjoy regular water supply.

He, therefore, appealed to them to report illegal connectors of the facility for the authorities to take legal action.

Alhaji Collins Dauda, Minister of Water Resources, Works and Housing, called on the contractors of the projects to expedite action as continuous water rationing could incur the wrath of many people in the metropolis.

He said government was ready to play its role responsibly and would, therefore, not accept any more excuses that would delay the execution of the projects.