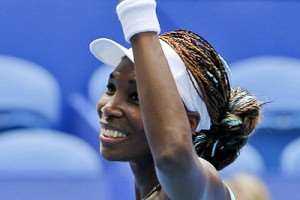 She may have needed eight match points to do it, but Venus Williams beat Mirjana Lucic-Baroni in her first round match at the WTA Brasil Tennis Cup.

Both players put some impressive power on display but it was the No.1-seeded Williams who was the steadier of the two throughout, taking it, 63 63. Things got close towards the end – Lucic fought off seven match points to close from 0-5 to 3-5 in the second set – but Williams finally closed it out.

“At 5-0 I was a little too confident and maybe playing a little too relaxed, but she also started playing really well and really aggressive on those match points,” Williams said. “She brought out her best tennis. It showed a lot of character from her. It's easy to give up when you're down 5-0, but she did really well to make it closer in the end. I knew it was just a matter of time before I got it, though.”

Williams and Lucic-Baroni were playing for just the second time, the first time coming all the way back in 2002 at the US Open – one would think there would be some dÃ©jÃ  vu from Williams, but no.

“I don't remember that match at all,” Williams said. “It's been a long time – 11 years. I don't know if she even remembers it. But she's always been a power player. I don't think much has changed.”

Williams also expressed how much she was looking forward to taking the court for a match that was originally scheduled for Monday night. “We were waiting from last night and this afternoon, too, but the rain was holding us back. I hadn't played a match for four weeks and was really looking forward to just finding some rhythm and hitting some balls, and trying to compete.' That's what I really wanted.

“I felt I was ready to play. I'm happy the rain stopped and that we were able to finish.”