Egypt / Al-Abidine, “Alaa is an athlete who has a prestigious palmares» 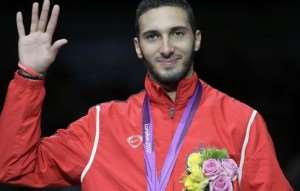 The Egyptian Alaa Abul-Qasim entered history after being  in London, the first African fencer to win a medal at the Olympics (JO-2012) with the silver medal in foil.

The young pharaoh had given to his country and to Africa the first Olympic medal in its history in fencing.

According to the president of the Egyptian Federation of Fencing, Egypt does not have enough interest to the young champion of 22 years. President Tamer Zein Al-Abidine wishes to implement a plan to help Alaa Abul-Qassem to progress:

“Usually, Egypt, Olympic champions do not receive the attention which they deserve. That is why they are desperate because their country does not have the interest in their talents. I do not want to do so. As a former international fencer, I can understand the disappointment of an athlete who is not honored in his own country. That is why I will do my best to give Alaa the attention he deserves. This champion is still very young. He is 22 years old and has a real talent for making prowess. But Alaa suffers from an injury to the shoulders he had two years ago and worsened in London in 2012. He must be well cared for that injury not to hamper his career. In fact, a rehabilitation plan is implemented for processing. His medical file was sent to a specialist in the United States last October. He should begin the treatment in the month of January, but the budget has not been released in time. March 1, he traveled to the United States for the treatment that will last a month. Then he has a very rich season in African and international competitions. He will play the African Championships and the Mediterranean Games in June. In August, he will play the World Championships and the Grand Prix tournament. '

“It should be noted that Alaa is an athlete who has a prestigious list. After joining the national team in 2005, he won several international medals. In 2009, he won a bronze medal at the Junior World Championships. In 2010, he was the world junior champion in the World. At the World seniors in 2012, he performed well with a 5th place, and before the Olympics, his world ranking was 8th. So we're talking of a talented and promising champion with a high technical level who won games against very strong opponents. Alaa was training since 2008 under the leadership of Polish Pawel Kantorski. But his contract ended last October.The new board wanted to hire a new Hungarian coach, but he refused to come to Egypt because of the violent incidents that occurred there. The Federation is still studying the issue. Currently, Alaa trains with the national team under the leadership of coach Sameh Ibrahim. '