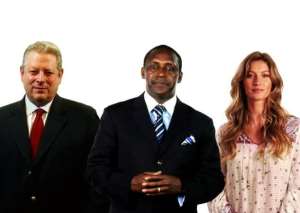 PHILADELPHIA– Former U.S. Vice President Al Gore and Gisele Bundchen, Brazilian fashion icon and UN advocate join UNIDO Director General Kandeh Yumkella in a public service announcement to voice their support In an effort to underscore the importance of the Sustainable Energy for All Initiative (SE4ALL).

Launched by United Nations Secretary-General Ban Ki-moon, the Sustainable Energy for All Initiative seeks to achieve three inter-linked global targets by 2030: universal access to modern energy services; the doubling of energy efficiency; and the doubling of the share of renewable energy in the world's energy mix.

Airing on CNN International, Gore, Bundchen and Yumkella point out that New York State alone uses more energy than all of sub-Saharan Africa. They also point out that nearly a billion and a half people lack access to electricity and nearly three billion who rely on traditional energy sources such as wood, coal, charcoal or animal waste inhale deadly fumes when cooking.

They also make the point that energy can transform economies, lives, continents and the planet, and emphasize that by supporting the new initiative the worlds has a historic chance to eliminate energy poverty. Energy, say Gore, Bundchen and Yumkella, can power development, women, progress and growth.

Last September, UN Secretary General Ban appointed Yumkella as SRSG & Chief Executive Officer of the initiative. “Now it is down to making sure commitments are transformed into kilowatt hours for the people, and to support governments to do for the energy sector what they did for mobile phones - deregulate or unbundle the sector and incentivize private sector participation,” said Yumkella.

Supermodel Gisele Bundchen of Brazil is a Goodwill Ambassador for the UN Environment Programme (UNEP).