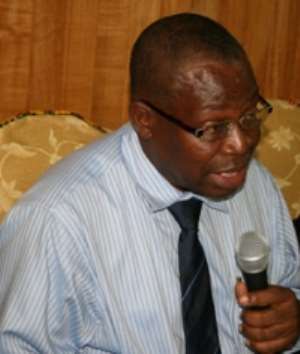 Accra, Feb. 26, GNA - To push further Ghana's commitment to ensuring maternal health, Government has appealed to health professionals not to sacrifice saving lives of the nation's mothers and babies on the altar of embarking on strikes.

Commending midwives and nurses, especially for their selfless service for pregnant mothers and children, Mr Rojo Mettle-Nunoo, caretaker Deputy Minister of Health making the appeal on Tuesday, said hardly do these categories of health professional go on strike in the country.

Everyday in Ghana seven women die from causes related to pregnancy and childbirth and three babies die every hour during childbirth.

'We can't continue to lose our mothers and children on senseless deaths,' he said during the launch of the 'Mamaye Ghana Campaign' that aims at arming the Ghanaian public with facts so that they can step up and play their part - large or small in saving the lives of mothers and babies.

The campaign is being initiated by Evidence For Action (E4A) of the School of Public Health at the University of Ghana, with funds from DFID, in collaboration with the Alliance for Reproductive Health Rights, a network of NGOs promoting a rights-based approach to sexual reproductive health.

Praising further the role of midwives in the survival of mothers and babies, the Deputy Minister said many retired midwives and nurses in the country continued to offer their relentless and selfless services to many health facilities across the country.

'The future of Ghana lies in the bellies of our mothers,' Mr Mettle-Nunoo said and noted that the attainment of the MDGs 4 and 5, required the efforts of all and sundry because, 'in many homes in Ghana, most often the one to help pregnant mothers is out of coverage area (not available.'

He pledged government's support to all initiatives that aim to accelerate the effort the nation was making to attain zero maternal and child death, saying it was ready to do the same with the Mamaye Campaign, which is also being implemented in four other sub—Saharan countries - Ethiopia, Tanzania, Sierra Leone, and Malawi.

Reading a speech on behalf of the Health Minister, Mrs Hanny Sherry Ayittey, the Deputy Minister said, in the last couple of years the country had seen an increasing number of efforts among various stakeholders to improve maternal and child survival.

He said the Ministry's programmes such as the MDG Accelerated Frame Work, High Impact Rapid Delivery, Safe Motherhood, the Free Maternal health care initiative and the recent bold attempt to include Family Planning under the National Health Insurance Scheme, had all sought to position Ghana on track to attain the MDGs 4 and 5.

Former First lady Mrs Naadu Mills' Campaign for Accelerated Reduction of Maternal Mortality in Africa (CARMMA) that made her an ambassador and strong advocate for MDG 5 was also lauded by Mr Mettle-Nuonoo.

Dr Joyce Aryee, former Chief Executive of the Ghana Chamber of Mines, who launched the Campaign, called for stronger collaboration among stakeholders on the promotion of the MDGs 4 and 5 and also echoed that the implementation depended on all individuals.

She said all players needed to form a synergy and like the fisherman's fishing net, as long as there was no deficiency, it would function well and hold all catch.

Dr Aryee asked whether the current interest and momentum would be sustained after the 2015 MDGs deadline, and added that our efforts and drive should not in anyway be because of the UN's agenda.

She said as a country and people, "we should make every effort to ensure the survival of our mothers and children. The world would not be if women are not,' she stated.

The key words for the way forward among the stakeholders, according to Dr Esther Offei-Aboagye, Director of the Local Government Institute, who chaired the launch of the campaign, are coordination and organisation. Again, she said, 'We need the change in technology by taking advantage of the benefits that social media platforms offer.'

Professor Audrey Gadzekpo on behalf of the E4A Steering Committee called on stakeholders to be a little more outrage in their commitment and fight towards ensuring a zero rate maternal mortality.

The implementing organisation of the campaign objectives, Alliance for Reproductive Health Rights, is carrying out the task alongside other many NGOs and civil society groups on health.

Mrs Vicky Okine, the CEO of the Alliance, said the time had come to change the story to moving from mortality to maternal and child survival. 'Mamaye is creating that platform to make this goal a reality. It will focus on the public arming them with concrete evidence on maternal health.