Transfer: Martins in the MLS? 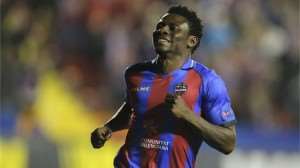 Obafemi Martins could continue his career in the North American Championship soccer MLS .

According to sport365 , the Nigerian international striker is in the viewfinder of Seattle .

The club which operates Djimi TraorÃ© from Mali “is willing to align with the release clause of Super Eagle, whose contract expires in June 2014,” said sport365 .

Martins, 28, evolves in time in La Liga with Levante in which he found the way of goals seven times in 15 games this season.