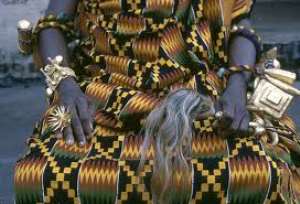 Prang (B/A), Feb. 25, GNA - Traditional authorities in the Brong-Ahafo Region has commended the government for the region's level of development within the past four years.

They were optimistic that the government would ensure speedy completion of other on-going projects in their respective communities.

The chiefs gave the commendation when Mr Eric Opoku, Brong-Ahafo Regional Minister paid a courtesy call on them at their various palaces last Tuesday.

He was accompanied by Mr Kwadwo Nyamekye-Marfo, his predecessor, National Democratic Congress (NDC) party executives, heads of departments and agencies as well as the various Municipal and District Chief Executives in the region.

The chiefs took turns to enumerate development projects brought to their areas under the Better Ghana agenda, which included classroom blocks, health facilities, extension of electricity and road networks.

At Prang, Nana Kwadwo Nyarko, the paramount chief said most of the roads in the area were in deplorable state and called on the Regional Minister to support them.

Pemapem Yaw Kagbrese V, paramount chief of Yeji and President of the Brong-Ahafo Regional House of Chiefs, said though the constitution barred chiefs from involving in active partisan politics, the house would continue to support the government in its developmental agenda.

He said access roads at Yeji were very poor and appealed to the District Assembly to reshape them.

Mr Opoku expressed appreciation to the chiefs and gave the assurance that their problems would be given the needed attention.

He implored the Regional House of Chiefs to endeavour to settle the 54 pending chieftaincy disputes before it amicably.

Mr Opoku said since peace was the pre-requisite tool for development and now that the 2012 general election was over, there was the need for the chiefs to bury their differences and rally behind the government for accelerated national development.

He said the government recognized and appreciated their roles towards the peaceful election and would not do anything untoward to jeopardize national peace and stability.

The Regional Minister assured the chiefs that as the embodiment of the people, the government would continue to contact them on matters on national concern.