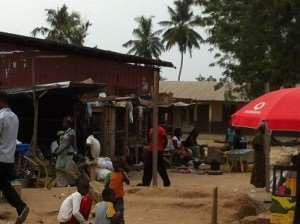 The Twifo Praso main market in the Twifo Attimorkwaa District of the Central Region was over the weekend hit by a massive decongestion exercise, led by the District Chief Executive (DCE) of the area and a task force from the District Assembly

The over two hours exercise saw several market stands, containers, kiosks and structures along the roadsides, either removed or demolished, to give space for vehicles and pedestrians that ply on the main streets to have enough space to move about comfortably.

The District Magistrate Court, police station and the A and D Basic Schools, which had been engulfed by the market and traders, with its associate noise rendering it impossible for court sittings and lessons to go on effectively and efficiently, especially on the two market days, were all cleared.

In an exclusive interview with The Chronicle, the DCE of the area, Mr. Bossman Osei Hyeaman, recalled that the judge at the Magistrate Court had on several occasion threatened to go for a transfer, due to the noisy and disturbing nature of the environment he found himself in during court proceedings.

He stated that the public school and the police station had also had their fair share of the noise, especially during market days, with the premises of the school occupied by traders buying and selling foodstuffs and other items.

On reasons for undertaking the decongestion exercise, Mr. Hyeaman said it was realised that most of the traders were not patronising the EU new market which was built for them, but had rather taken to selling along the roadsides, with containers and heavy tracks either loading or offloading goods and other items.

He stressed that these activities frequently brought about massive congestion, resulting in heavy traffic, adding that on a market day, the principal streets in the area are shared by both traders, who are either buying or selling, and vehicles posing a grave danger.

Mr. Hyeaman said a one-month ultimatum was given to the traders, and the Information Services Department was also contracted to make public announcements to create awareness, and also make it clear to them the reasons for the decongestion exercise, but none of the traders paid heed, and the only option was to embark on the exercise.

He noted that the exercise was not meant to collapse businesses, but to purposely save human lives and properties, as well as creating enough space for traders and vehicles.

Mr. Hyeaman also argued that the exercise was not done under political lines, since most party members were also deeply affected, and the motive behind was to make the town and the market a free flow area and accessible to all.

He, therefore, appealed the chiefs and elders in the area to help create land banks for the Assembly, in order to move the fitting shops and carpenters who have sprang on the streets to a particular place, to reduce congestion in the town.