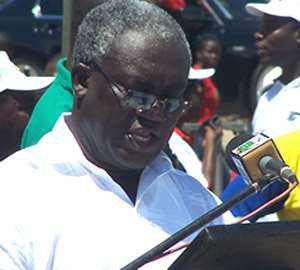 The Ghana Trades Union Congress (GTUC) says privatization of the Tema Oil Refinery (TOR) will not promote the interest of majority of Ghanaians and therefore the labour front will resist any attempt to privatize it.

GTUC said it was paradoxical that Ghana, which now produces oil, should stop domestic refining and import refined products.

In a statement signed by Kofi Asamoah, its Secretary General, in Accra the Labour Union said, “TOR is suffering the fate that has befallen all important state assets after having been down in preparation for privatization.”

TUC described the attempt to denigrate TOR as a manifestation of corruption that had engulfed the petroleum industry.

The statement said the petroleum products price build-up contains as many as six different margins designed to benefit a few owners of marketing companies and other players in the industry.

The TUC alleged that the lack of transparency in the petroleum industry is deliberately designed to facilitate corrupt practices of the few people in society, who are well connected.

“We believe that some transparency in the petroleum sector will lighten the burden on Ghanaians and it should be considered as part of the measures to deal with the chaotic situation in which the petroleum industry finds itself.”

Meanwhile, labour unions and other worker associations say they will go ahead to demand an adjustment in their salaries despite complaints by President John Mahama.

GTUC has already written to the Minister of Employment and Labour Relations to hold a National Tripartite Committee meeting to determine a new national daily minimum wage for 2013.

The Chairman of the Teachers and Education Workers Union (TEWU), Peter Lumor said government and state officials may be the cause of the swelling wage bill rather than public sector workers.

He added that TEWU will go ahead to demand its due despite the president's concerns.