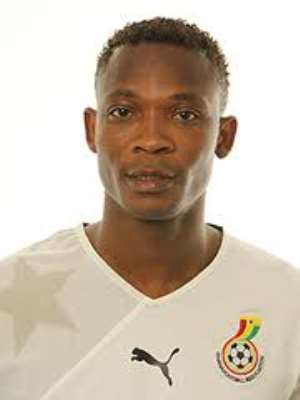 Painstil, arrested late Friday for allegedly assaulting his wife, Richlove and a neighbour is expected to report himself to the Legon Police where he was kept for hours in fulfillment with his bail conditions.

DSP Tettey said all involved in the issue are currently cooperating with the procedure, insisting the Police will continue to carry out their investigation in order to reconcile the variations.

He poured scorn on suggestions that he spoke to the media when the news broke without facts, insisting all the pieces of information placed out there by him were from verifiable sources including the medical facility Mrs Painstil was reported to have been rushed to as well as his superiors.

The Hapoel Tel-Aviv defender has come in for bad press the last one week following allegations of fling with prostitutes at the Black Stars camp during the team's failed fifth Nations Cup quest in South Africa few weeks ago.

The allegations had barely died down when a neighbour who lives at the plush Trasacco Valley apparently called the police following an alleged assault in his attempt to act as the 'Good Samaritan' when the player charged on his wife.

Asked if the Police could still press charges against Painstil, currently one of the most senior figures in the Black Stars, despite his wife's decision against that action, DSP Tettey answered in the affirmative.

He said 'it is not the duty of his wife (Richlove) to press charges against him (Painstil). It is that of the Police. Besides, she is not even the complainant. The complainant in this case is a neighbour whom she sought refuge while she was being assaulted.'

The defender who was granted bail late Friday is expected to arrange with the Police to regulate his mandatory frequent reports to the station.